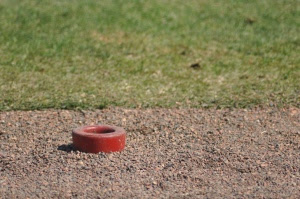 In my latest "In Good Faith" column for the Hingham Journal I reminisce about the good old days of little league baseball. The days before pitch counts and teams being sponsored by nail salons. A time when only football helmets had masks and chin straps and the on-deck circle wasn't taboo. See, I can be a cranky old man with the best of them.

One of the best things about coaching little league baseball is that it gets me out of the office and into the fresh air. Of course around here “spring” baseball consists of standing on a cold, windy field in a light rain wearing mittens. Coaching directives include such pearls as “If you guys get too cold, do some jumping jacks in the dugout” and “Stop walking so many batters! It’s freezing and I want to get home in time to watch Modern Family.”

While the game basically looks the same as it did when I was a kid, there are a few notable differences. These differences might seem minor but they say a lot about how society has changed over the years. Yes, many of the changes revolve around safety and fairness – not bad things to be sure – but at least some of the fun has been sucked out of the experience in the process. So if you’ll excuse me I’ll go into my cranky old man mode and wax nostalgic about the way things used to be. Fortunately this attitude never appears in churches.

First of all, we used to have on-deck circles. This was the designated area where the next batter in the lineup would swing a few bats to get loose or maybe put on a donut. When kids today think of donuts they can only imagine the word Dunkin’ before it. They have no idea that in baseball a donut is a circular metal weight, generally covered in rubber that is slipped over the handle of a bat to make it heavier in the on-deck circle. The idea is that if you take a few swings with a heavier bat, by the time you take it off and get up to the plate your bat will feel much lighter. Hitting is about bat speed and this is both a physical and psychological tool that today’s little leaguers will never experience.

Why no on-deck circle? Why, safety of course. In fact, if the umpire catches anyone besides the batter with a bat in hand it is an automatic out. Which means coaches spend much of their time telling kids to “Step away from the bat.” Elementary-school aged boys seem especially drawn to potential implements of destruction.

The other major shift is the emphasis on pitch counts. Now in fairness this transcends little league as even professional managers and pitching coaches now obsess over the number of pitches thrown by each pitcher. Back when we were kids you pitched until a) your arm fell off or b) you starting walking a lot of hitters. Much of the limited strategy employed by little league coaches surrounds monitoring the pitch counts. For each age there are rules governing the maximum number of pitches allowed.

To further complicate things guidelines are in place that translate pitch counts into subsequent days off until that player is allowed to pitch again. For instance a ten-year-old is allowed to throw up to 75 pitches in a game. However if said pitcher throws over 66 pitches he or she cannot pitch for four calendar days; 51-65 pitches translates to three days rest; and it goes down from there. Got it? I suggest that each team be issued an MIT-trained pitch count analyst at the start of the season.

Players also now rotate positions at the same rate that you’d trade partners at a hoedown. Everyone is given a chance to play every position. In my day, if you couldn’t catch the ball they sent you out to pick daisies in right field. Today if you can’t catch they’ll make you the first baseman for a few innings. Perhaps this is why the games seem to take longer. When I was a kid I was a shortstop – that was my position and that’s what I played every inning of every game. I didn’t pitch, I didn’t catch, I didn’t play the outfield. Now, if asked “What position do you play?” kids can’t answer. They can only tell you what position they like best.

But even with all the changes, nothing beats an early evening out on the ball field. I’m coaching with another Episcopal priest who lives in Hingham – the Rev. Tom Mulvey. While our club is mired in the middle of the standings, we do lead the league in one thing: Episcopalians.
Posted by Tim Schenck at 7:12 AM

I will pile on with another lost art. The art of chatter!!! This is outlawed. Outrageous.