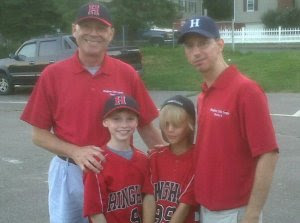 Many of you know that I spend a lot of my free time coaching little league baseball. The Rev. Tom Mulvey and I coached our boys' ten-year-old teams in the Hingham Little League this spring and then, in a Beatles-like reunion tour, agreed to coach one of the summer travel league teams.

I won't share our teams' joint won-loss record for fear of self-incrimination. And I have Tom's legal degree to back me up here. But we're winding up the regular season tonight in the beachside Shangri-La of Hull before starting the playoffs on Wednesday night. Now before you start popping the champagne and offering us kudos for our sensational coaching acumen, you should know that every team makes the playoffs. Even a certain 3-9 team that will go unnamed.

I'm not here to wax nostalgic since we're still in the hunt. But as much as I love nearly everything about little league baseball (I still consider my time as a shortstop in Baltimore's Roland Park Little League to be my athletic "glory days"), I will admit that certain things drive me nuts. Here are a few in no particular order:

1. Parents who think their precious darlings are much better than they really are. The level of delusion can be astounding. I love it when parents are supportive and encouraging with their kids -- raising self-confident children is a critical piece of parenting. But when they can't reach the plate from the mound, they shouldn't be pitching. It's not good for their self-esteem (regardless of dad's hopes and dreams) to get into a game and walk eight straight batters. And if the only thing your son can hit is his little sister, I'm not batting him cleanup.

2. Walks. Golf has famously been referred to as "a good walk spoiled." Multiple bases on balls could be called "a pleasant evening ripped away in a long, slow, painful death." They have been the scourge of little league for generations -- they make coaches pull their hair out, teammates fall asleep in the field, and parents wish they'd signed the kid up for an hour-long pottery class instead. In those innings where walk piles upon walk I'm reminded of the line spoken by Clint Eastwood as Gunnery Sergeant Tom Highway in Heartbreak Ridge: "You can rob me. You can starve me and you can beat me and you can kill me. Just don't bore me!"

4. Opposing coaches who believe they are the modern-day Miller Huggins. The rules are very clear -- you can ask for clarification from an umpire but you cannot argue calls. I've seen coaches bully the umps (who are often teenagers) throughout the game so that when, and if, the game comes down to one critical call at the end they'll be more than likely to go the route of conflict avoidance and make the call in favor of the loudmouth coach's team. This might not be a bad strategy if there was a lot on the line -- like professional pride, a world championship, a job next season -- but this is a league full of ten-year-old kids. They might get disappointed about a tough loss but within minutes they're back running around and laughing with their buddies. If your happiness and self-worth rides on the crest of how your team is playing, the issues are likely deeper than one could imagine. (Oh, and if you didn't know, the hot-tempered Miller Huggins managed the team many consider the greatest ever, the 1927 New York Yankees, to a World Championship).

5. Players who lose track of the batting order. When I was a kid (which is, of course, how things should be today), I had my helmet on three batters before I was due up. Everyone was anxious to hit and you knew that if you weren't ready to go, the coach would skip your turn and bench you. Despite posting the lineup in the dugout and calling out the names of who's coming up, sometimes kids are caught without a helmet, a bat, and a clue when it's their turn to bat. This makes me crazy whether it's our team or the other team. It's like the guy sitting in his Prius at the red light who's too busy texting to notice that it turned green 15 seconds ago. Honk! 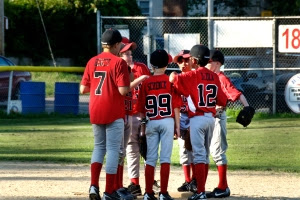 6. Parents who believe their children are entitled to make the All Star team. It takes more than mere athletic ability to be named one of our team's two All Stars. It takes actually showing up to games and practices. The ability to play the game at a moderately high level is a plus. Just because your child was an All Star on his lacrosse team doesn't mean that he's an All Star in baseball. Similarly, just because he's good at the piano doesn't automatically make him a whiz on the trombone.

7. Umpires with inconsistent or absurdly large strike zones. I realize this is an issue at every level of the game and, as I noted earlier, many of our umps are teenagers. However, in no league at any time in the history of baseball has the strike zone ever been from the top of the helmet to the soles of the shoes. We had this issue in Braintree a few weeks ago with an ump who was clearly no spring chicken -- the gray hair would indicate that he was decidedly not a teenager. I'm not sure if, like your typical teen, he had a hot date that night but the strike zone was larger than Big Papi. Game after game we preach to the kids (and I mean that literally given our vocations) not to chase the high stuff -- nothing good ever comes from it. But that night anything that didn't sail over the backstop was called a strike. That's not helpful for any kid trying to learn the nuances of the game. Although, I have to admit, it was the quickest game of the year.