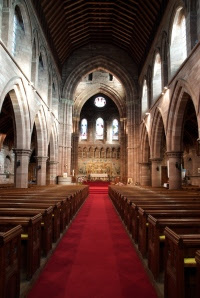 In light of yesterday's Emmy Awards I've been thinking about red carpets. I've also been stewing about not winning an Emmy again this year. I'm like Susan Lucci but without the nominations.

A lot of churches have red carpets. I'm not sure why but I have several theories. The practical reason is the church's predilection for klutzy chalice bearers who spill consecrated wine all over the rug. Granted, Jesus can take it -- he's been through much worse -- but the red carpet covers a multitude of sins.

Perhaps the real reason for red carpets is the clergy's desire to feel like a star. They (um, I guess I have to lump myself into this) like to process in on a red carpet every Sunday. It makes them (uh, me too) feel important. At weddings people take a lot of pictures using flashes (despite the note in the bulletin asking them to refrain from flash photography) so on occasion it feels like the paparazzi have descended upon the red carpet. And we're the star! Fine, the bride is but we're a close third or fourth.

Of course clergy also dress up for their (our) grand entrances. There's good reason every sacristy in all of Christendom has a full length mirror -- you need to primp before sashaying down the red carpet. 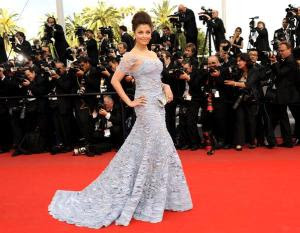 Jay Leno once called politics "show business for ugly people." Perhaps the same could apply to the church. We generally don't get as much media attention as politicians but at least we regularly walk the red carpet (take that Barack, Mitt, etc.).

So that's my theory on why churches have red carpets. Of course I could be wrong. Red carpets may simply be the ones most often on sale at Bill's Carpet World.
Posted by Tim Schenck at 10:18 AM

Aw, man, you have a full-length mirror? Come to think of it, we don't have a red carpet, either. At least not in the aisle. I think I'm having issues with our glamour quotient...

"Of course clergy also dress up for their (our) grand entrances. There’s good reason every sacristy in all of Christendom has a full length mirror — you need to primp before sashaying down the red carpet."

I assume these are your vesting prayers, dear Father.

The tradition of red carpets is probably linked to the red veil that stood before the Holy of Holies in the temple. Gone is the red veil and/or curtains, but the red carpets remain, although this has been notably decreasing in recent years.