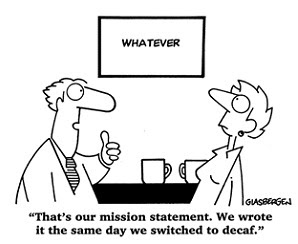 "Free Coffee and Eternal Life." That's the essential mission statement of any Episcopal church I've ever cared to be associated with. Unfortunately most vestries won't adopt this as their actual mission statement. Something about not being taken seriously by...anybody.

If you've ever been through a process to revise your parish's mission statement, you may not be able to read this because you've been comatose ever since that ninth committee meeting. Group writing projects that seek consensus are brutal. And they're rife with semi-colons. A general rule of thumb when church shopping on the internet? If the mission statement has more than four semi-colons, don't even waste your time with a visit. You'll likely end up on the vestry in that short but heady time between filling out a newcomer's card and being sent a pledge card.

We've started looking at the mission statement at St. John's as a precursor to engaging in some strategic planning. I actually enjoy the process (don't tell anybody) because it allows us to take a step back and focus on our passions, examine what makes us unique, and reflect upon where we want to be.

As a starting point I took a few minutes to think about my own personal mission statement. This may sound all life coach-y but that wasn't what I had in mind. I just wanted to jot down some quick notes about how I envision my ministry in general and at St. John's in particular. If the rector's personal sense of mission doesn't have some major overlap with the parish's, there may well be a problem. Hopefully both rector and parish discern such congruence during the call process. If not, it's a template for future conflict.

1. Grow the church numerically, spiritually, and financially (not because bigger or more is better but because of the Gospel mandate to share the Good News).

[I had an arrow pointing off "Good News" to clarify it as the "Message of God's salvation, forgiveness, love, and reconciliation."]

3. Build joyful community where people are drawn ever-deeper into relationship with the risen Christ.

4. Help people to take their faith, but not themselves, seriously as they encounter the divine in everyday life, not just on Sunday morning.

That was it. At some point I could always extend the exercise by adding goals and objectives under each one but I probably won't. Who has the time? But I did find it helpful and suggest everyone engage in a similar process at some point whether or not your parish/organization/business is engaging in a mission statement revision.

This won't be the first parish where I've been involved in such a process. When I was a freshly-minted rector serving a parish in New York I noticed there was a major problem with the mission statement: namely that God wasn't included. So we went through the process and, a few months and several semi-colons later, had one that much better reflected the faith of the community. I'd like to think God was well pleased.
Posted by Tim Schenck at 4:45 PM