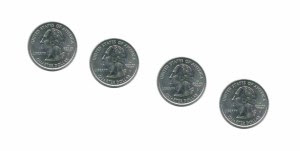 The stewardship message is getting through at St. John's! At least to one little girl in our parish.

A young lady I'll call Paige (because that's her name) came up to me after the 10:00 am liturgy yesterday. Actually she made her entire family wait until after the "Episcopal 201" class I taught following coffee hour. With some encouragement from her parents, she gave me a toothless grin and told me the Tooth Fairy had visited the night before. Then she presented me with two things: a drawing of the church and four shiny quarters. Paige had decided, all on her own, that she would give a portion of her "earnings" to the church. In over a decade as a priest, and countless lost teeth (Sunday School kids', not mine), I can safely say that I've never had a child make such an offer.

The encounter made me think back to my own Tooth Fairy days. There was always something exciting about the loss/reward dental cycle. Receiving a silver dollar or a crisp dollar bill was a thrill -- and I would have never thought to share any of the bounty with anyone else!

Generosity is a value many parents seek to instill in their children. Yet it's often a losing battle -- developmentally most children just aren't there. I recall my own boys' pre-school-aged fights over sharing. It didn't matter that we owned five toy dump trucks -- they both wanted to play with the SAME dump truck. [Insert audio of loud and continuous screaming and whining.]

Generosity is also a value we try to instill in adults. Sometimes people, like Paige, surprise you with unexpected and heroic generosity. And at others we devolve into the pre-school mentality over sharing.

After thanking Paige, we found the person in charge of putting the collection in the safe and Paige dropped the coins into the attractive bright orange, vinyl bag. With the sound of each clink, I smiled in the knowledge that here was someone who understood just how good it feels to be generous. May she be an inspiration to us all.
Posted by Tim Schenck at 5:15 AM