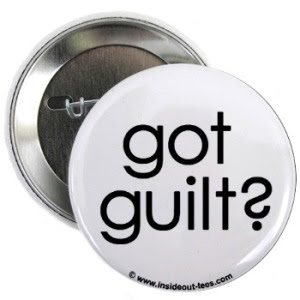 In my latest "In Good Faith" column I confront guilt and explain why I have resolved to never make another New Year's resolution.

By now most people have abandoned their New Year’s resolutions. Perhaps yours is still hanging on by a thread or maybe you’ve defied the odds and it’s still going strong. But many have lost the will to get up and go to the gym in the dark before work; many have ditched the diet after the first week of self-denial; many have gone back to drinking Diet Coke for breakfast.

When you make a resolution you can’t keep you’re left with one thing: guilt. This is the reason I don’t make New Year’s resolutions. There’s nothing worse than setting yourself up for failure and then chewing on the guilt of good intentions. Sure, I’ll give something up or take something on during Lent, the 40-day season that precedes Easter, as a spiritual discipline but for a number of years I’ve resolved to not make resolutions in the aftermath of a new calendar year. And I’ve kept this resolution with resounding success.

When it comes to religion, there’s plenty of guilt to go around. Dare I say some faith traditions even thrive on it? People feel guilty when they don’t go to church – I can’t tell you the number of people who give me excuses for why they haven’t been in a while when they run into me at the grocery store (oh, who am I kidding? It’s not the grocery store but the local coffee shop). And many are burdened with the guilt of being not-a-good-enough “fill-in-the-blank denominational affiliation.”

So many people approach their faith lives in a posture of guilt rather than one of joy. This is, of course, no way to enter a fruitful relationship with the divine. Guilt is not good for the soul (though it does serve as a great motivator to call your mother).

Rather than guilt I like to think in terms of invitation because God doesn’t want us to attend to our faith lives out of guilt but out of invitation. God welcomes us back again and again; God beckons us to return. God doesn’t say “If you really loved me you’d join a church committee” which is a good thing since there’s only so much bad coffee one should be subjected to in a lifetime.

This doesn’t mean you shouldn’t go to church or that the notion of being “spiritual but not religious” is anything but an easy way out. At their best, faith communities provide accountability along with inspiration and invitation. It’s a lot easier to worship together than it is in isolation and Jesus himself, after all, invited a community of disciples to share in his earthly journey. He wasn’t a lone ranger going it alone but formed a group of people passionate about being drawn ever-closer to God.

One of my mother’s mantras has always been “I don’t do guilt.” For years I thought she meant she didn’t lay guilt trips on others. But I recently found out that she meant “I don’t accept guilt heaped on me by others” (yes, a Freudian therapist could have a field day with this). But while guilt is part of the human condition and unavoidable in certain situations, it is important to recognize it for what it is and what it is not. Guilt is a human response to a perceived short-coming. It should not be confused with sin which is a barrier to relationship with God. But guilt itself is not from God; rather it is a self-imposed condition.

If you made it to the end of this article at least you don’t have to feel guilty for not finishing what you started. And if you quit in the middle, well, you can always pick it up again during Lent. In the meantime, lay off the guilt. Life’s hard enough without it.
Posted by Tim Schenck at 9:55 AM

I've often thought that what we mean when we say "guilt" is really shame. If I do something wrong, I _should_ feel guilty about it (since I _am_ guilty!). However, most of the time people simply feel ashamed that they didn't get done what they had hoped and prayed to get done. Church is good for both of those--confess those things "done and left undone" and be absolved of the legitimate guilt as well as being reminded that "God saw that it was good" includes each one of us.

You are right God is not the author of guilt any more than he is the author of sin. But God can use guilt as a way of self disclosure in order to help us strip away every excuse that would keep us from better knowing Him. Unfortunately there are those who speak only of a type of “psychological guilt” because for them only society can be guilty—people do nothing individually that would incur actual guilt. “I will return again to my place, until they acknowledge their guilt and seek my face, and in their distress earnestly seek me” (Hosea 5:15). This passage Bible passage speaks to a personal guilt and not a psychological guilt or a guilt that can easily be swept aside as belonging to someone else. There is a time and place for dealing with real personal guilt.