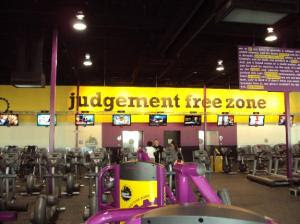 I just joined Planet Fitness. It was inevitable since Bryna became a member of the recently-opened Hingham branch a few months ago. The Hingham rec department has a low-cost gym which I used to go to but for about the same price ($10 a month!) I can work out without feeling like I'm in someone's cellar.

If you're not familiar with it, Planet Fitness is a wildly popular, ever-growing franchise of gyms. In other words, it's the opposite of main-line denominations.

I'd never stepped foot in a Planet Fitness but the first thing that strikes you is the color scheme. If you can't abide purple and yellow while pumping your legs on the elliptical machine, don't bother. It's omnipresent. I'm sure market research drove this choice as it seems to have driven the entire Planet Fitness experience. In fact the whole vibe of the place feels contrived and driven by polling -- much like the Romney campaign. 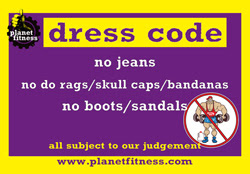 With the decor and the not-so-subtle messages on the walls, you can almost imagine the responses: "I want a gym where I don't feel like people are staring at me; I want a gym without grunting, skull cap wearing, muscle-shirt wearing power lifters; I want a gym wear I can watch flat screen TVs and listen to my i-Pod; I want a gym where people don't sweat so much as perspire."

Now, the place works for me. I don't need to listen to Megadeath while I pump iron (and I use that term loosely) or have some guy yelling at me to just "Push through the pain!" But there's an odd sense of forced community indicative of the slogans plastered around the place.

Their catch phrase "Judgement Free Zone" is painted in huge letters on the walls of the gym. In fact this slogan is even trademarked (and, some would argue, is spelled wrong). I'm not sure how this applies to a health club. I've never had anyone come up to me, look at the mileage on the treadmill, and say "Four miles? That's pathetic. You're a worm and no man." But maybe this is geared toward the overweight newbies who are taking the daring step of joining a gym but fear they'll have fellow exercisers whispering behind their backs. Again, I've been a member of myriad gyms over the years and I've found most people are too busy working out to care about anyone else's routine. 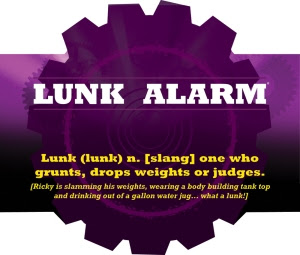 Ironically enough, you could argue that Planet Fitness is the antithesis of a "judgement free zone." If you are a serious body builder, you're clearly not welcome. There's a dress code for one thing. And if you grunt too loudly or drop your weights after your set, you'll set off the "Lunk Alarm" and be asked to leave.  This is why there are blogs out there called  "Planet Fitness Sucks." Scratch the surface of some of the comments and you'll quickly see that a class war is at the heart of the anger.

The other sign you'll encounter is "No critics." Evidently Roger Ebert, if he ever found his way to an exercise bike, wouldn't be welcome. Again, I'm not sure who's judging and criticizing people at gyms across America, but this seems to be a big fear among potential gym members.

I'll plan to enjoy working out at Planet Fitness -- it's clean, comfortable, and convenient. The vaguely Orwellian signs don't bother me that much and I just plan to keep my head down and ignore the slogans which feel more like ground rules for a youth group than anything else. And who knows? The contrarian in me just might start making snap judgments about those around me. I don't think they can kick me out for my thoughts.
Posted by Tim Schenck at 7:11 AM

Email ThisBlogThis!Share to TwitterShare to FacebookShare to Pinterest
Labels: Running

To each his own, I suppose. I find I don't lift to my proper potential without loud early Metallica going on...

When they put that place in, I was sure it was doomed to business failure. I've watched two other fitness places go largely unused within half a mile (one on the left of 3A as you go toward N. Weymouth, and the other right in the Shipyard). But I guess that's why I'm not an investor as the parking lot is packed any time PF is open. The closest I get though is Bruegger's (where I am typing this from, actually). Speaking of not judging...I'm not nearly the coffee expert that you are. I just like hot drinks.

I walked into a planet fitness without knowing what it was. I'm a 6'0 340 lbs sponsored powerlifter, and they pretty much laughed me out of their gym. I've never felt so discriminated and judged in my life. I absolutely loved it!