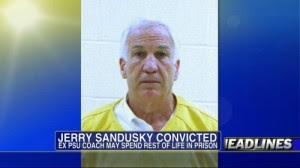 While I'm not exactly comparing Joe Paterno to the Pope, it's hard not to see parallels between the sex abuse scandals at Penn State and in the Roman Catholic Church. Blind loyalty, concerns about protecting the institution above all else,  gross negligence, and abused children.

This week's headlines screaming about former assistant coach Jerry Sandusky's guilt on 45 of 48 counts of sexual assault must be dredging up tremendous emotional trauma for those affected by abuse in the church.

A lot is made about the culture of both institutions. Paterno is often referred to as the "god" of Penn State Football. People close to the program say that nothing ever happened without his approval or knowledge. Far from being the bespeckled, slightly out-of-touch grandfatherly type -- an image he cultivated -- he was a larger-than-life figure who controlled every aspect of the program and demanded absolute loyalty from his players and coaches.

Like I said, I'm not comparing JoePa to the Pope but there are clearly some parallels in terms of utter, unquestioned devotion and control. This isn't to say that Paterno or the Pope are evil in any way -- if questioned they would obviously be appalled at such behavior. But I do question whether their "protect the institution at all costs" mentality got in the way of their better judgement as these issues were coming to light internally -- before the respective scandals broke.

Any institutional leader sets a tone. I think this is one of the great responsibilities of leadership. The tone varies -- it may be a culture of joy and gratitude; or discipline; or integrity; or creativity. Like it or not, whatever tone is set comes down from the top. When there is dissonance between the tone and the actions of an organization, an erosion takes place. It may be slow but eventually the hypocrisy will be exposed. Sometimes the blow is crippling and sometimes an institution can recover. But unless lessons are truly learned and the culture is changed, it's just putting off future crisis.

Please continue to pray for victims of abuse; both those who have come forward and those who suffer in silence.

I do think you mean "bespectacled" in the third paragraph, although I'm not sure that is a word.

On a more serious note, I agree completely with your post. There *are* parallels in terms of institutional and leadership behavior. But while the criticism is warranted, we should also look to our individual selves and whatever institutions we love, whether a local church, team, club, school. We like to think that if *we* were in charge, we'd behave better, but it takes real fortitude *not* to circle the wagons, to take the accuser seriously, to deal with the fallout. Prayers for us all.

Just a tragic story when thinking of all those young boys!

You have said about what I was thinking this weekend. Thanks for putting it into words!

Thank you for this post, Fr. Tim. Your thoughts on institutional leadership are spot on. Prayers, indeed. For all.