10 Things That Annoy Me (the column) 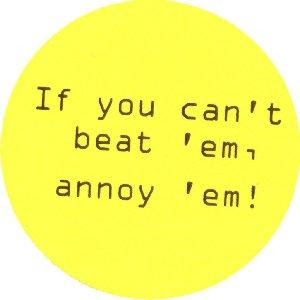 In my latest monthly column for GateHouse Media I discuss the rationale for starting my new blog "10 Things That Annoy Me." If you haven't yet contributed a list, you can do so here. And if this little exercise has made your own list of annoyances, fear not. My vacation will be over soon enough.

10 Things That Annoy Me

In preparation for a little vacation time, I decided to start a new blog. You know, I wouldn’t want to be bored or anything. So on a whim I created a site called “10 Things That Annoy Me.” It’s not that I’m particularly negative – a touch sarcastic perhaps – but certainly not Eeyore-esque. I just thought it would be fun and cathartic to list (some of) the things that annoy me and encourage others to do likewise.

I’ve been surprised by how many people have submitted their lists to me, which I subsequently post on the website 10thingsthatannoyme.wordpress.com. I’ve seen everything from wearing a name tag to air quotes to soggy French fries to ferns. There is no dearth of annoyances and pet peeves lurking in people’s lives, many of which are as unexpected as they are amusing.

Some of my own include the Housewives of New Jersey, Orange County, etc; white zinfandel; prying my kids off the Xbox; stems on blueberries; trick candles; and attempting to fold fitted sheets.

One thing that happens in naming your annoyances is you start to reflect on those things that delight you. This little exercise helps remind us that there is always a need for balance in our daily emotions. When you’ve had it up to your neck with annoyances, it always helps to think about those things that delight you and engage them. For me, this would mean skipping rocks with my boys or sitting in my stadium seat from the old Memorial Stadium in Baltimore or drinking a mug of freshly roasted and ground coffee. Making equal time, or at least some time, for the things that delight us is an important spiritual discipline.

Still, I don’t plan to start a website asking people to send me the 10 things that delight them.  Frankly, they’re not nearly as entertaining as the annoyances.

Some might say “Shouldn’t a priest focus on more positive things rather than dwelling on the negative?” To which I would respond, “If it weren’t for the goodness of God’s creation, coupled with the brokenness of humanity, I’d never have anything to say!” And anyway, I’m sure the human side of Jesus could have named at least 10 things that annoyed him during his earthly ministry. Things like walking on cold water or the disciples failure to understand his teachings or the crowds that wouldn’t leave him alone for a few quiet moments of prayer.

So I invite you to participate in and have fun with this interactive project. Just kindly take it in the spirit in which I intend — a humorous look at the foibles of the human condition. If we can’t laugh at ourselves what’s the point?

I’m sure you can name (at least) ten things that annoy you and I’d love to hear about them and put them on the website. The guidelines are simple: e-mail your list of ten things to me at frtim1@gmail.com, include a photo, and a one to two sentence bio. Then take a step back and let the catharsis begin!
Posted by Tim Schenck at 3:35 PM

Email ThisBlogThis!Share to TwitterShare to FacebookShare to Pinterest
Labels: 20 Things that Annoy Me, In Good Faith column

Your 10 Annoying Things is just the ticket for those of us lucky souls that have a bit more time to contemplate our navels. It was fun, a little cathartic (ok, maybe more than a little) and besides, who really wants to hear their priest complain. Thanks for the gift of summer fun, which should hold us til Lent Madness.

Things That Annoy Me said...

A lot of things annoy me, too. Although I enjoyed your list; made me chuckle.