Top 10 Reasons Not to be Jesus' Wife 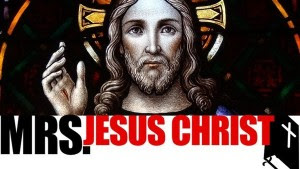 Unless you've been hiding under an altar, you've undoubtedly heard about the latest faith-based kerfuffle: the notion that Jesus had a wife. The alleged evidence is based on a papyrus fragment of a Coptic text released by a Harvard professor in which Jesus refers to "my wife." Many scholars are now calling it a modern forgery or a fake.

Unless you're Dan Brown, it all seems like much ado about nothing. The odds that Jesus had a wife are remote at best and ultitmately it doesn't change anything. Married or not, Jesus is still the Savior.

Nonetheless, it's fun to imagine what Mrs. Jesus would have had to endure. Thus, here are...

The Top Ten Reasons Not to Be Jesus' Wife

1. It's hard to take the Lord's name in vain when he's standing in the kitchen.

2. When arguing, he always turns the other cheek. So aggravating!

3. Passing the salt at the dinner table gets you a lecture about what happens when salt loses its saltiness.

5. Having to endure people singing "Joy to the World" on his birthday gets old.

6. Being called "Mrs. Christ" is irritating. "How many times do I have to tell you, that's not our last name!"

7. Awkard encounters with Pilate's wife at the next pilates class.

8. Your mother-in-law is perfect. "Do you have any idea how much pressure that puts on me at Thanksgiving?"

9. Even though it's all innocent, it's tough when your husband is always laying hands on other people.

10. It's tough to live with someone who's nursing a major Messiah-Complex.
Posted by Tim Schenck at 3:29 PM

This is absolutely brilliant! Thank you.
Cate Mattison, Church of the Holy Spirit, Lebanon, NJ

Well, you've done it again! Made me laugh at the end of a really hard week,,thanks,

I live to serve, Catherine. Hope next week is easier for you.

I love this! Great job!

A variation on the Daily Show riff, "He can raise the dead, but can't remember to put down the toilet seat!"

Hah. I bet John Stewart had a field day with this -- I missed it.

So good to be able to chuckle with Jesus.

Another reason: Its pointless arguing with the perfect husband, you`ll never win.. - but you`ll probably be the only person to have been a widow in the *middle* of your marriage*....

This is so funny!! You're a Christian Jerry Seinfeld. Was shared with my by St. Paul's Brookfield CT.

LOL! THIS is fun. Thanks

Actually, the Colbert Report had the best riff of all on this subject. Nobody has topped this: http://www.colbertnation.com/the-colbert-report-videos/419256/september-19-2012/wife-of-jesus

Your father in law would be a really special person.....