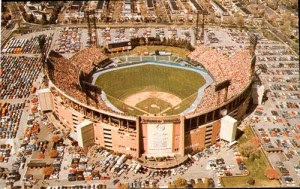 Some have wondered in recent days why I'm so passionate about the Baltimore Orioles. It's hard to explain without sounding like the pseudo-baseball philosopher George Will. And it's complex -- swirling emotions always are. It transcends simply "being from Baltimore" and to sort it all out would take more than a simple blog post.

But I thought I'd share an essay I first wrote for the Baltimore Sun over a decade ago, a version of which (below) ended up in my book What Size Are God's Shoes: Kids, Chaos, and the Spiritual Life. In it, I share the story of how I acquired the stadium seat from the old Memorial Stadium that now sits on our screened-in porch. The attachment I have for my beloved Birds may remain a mystery, especially to those who eschew sports, but I think anyone can relate to the emotions themselves.

I guess I've been in a reflective mood after some intense, extra inning games against the hated Yankees this week. After today's deciding game in the American League Division Series, only one team will continue their season. You know where my heart will be.

I can’t fully explain why, but I was mystically drawn to the old Memorial Stadium in Baltimore several years ago. The pilgrimage was spurred by the announcement of the structure’s imminent destruction at the hands of a wrecking ball. Yes, the stadium had become the latest victim of the building craze in the arena of professional sports that has turned many old stadiums into dinosaurs before their time. Memorial Stadium, the one-time home of the Orioles and Colts had sat vacant for a number of years, falling into disrepair and becoming a mere shell of its former glory. And yet I was drawn back to this place, a place where I spent much of my youth dreaming, rejoicing, despairing, cheering, and jeering.

When the sale of stadium artifacts was announced, an indefinable force propelled me back to 33rd Street. A variation on the mantra from the Kevin Costner baseball movie Field of Dreams came to mind: ‘If you raze it, they will come.’ As I stood in line with my fellow pilgrims waiting to get onto the field, I couldn’t help but feel that I was entering a space no less sacred than a European cathedral ruin. If you’ve ever experienced this you know that even though the stained glass windows are long gone, weeds shoot up through the remains of the stone floor, and bats glide boldly through what’s left of the vaulted ceiling, there is still a pervasive sense of being on holy ground. The generations of prayers that emanated from the site still hover like a cloud of witnesses. You can almost hear the voices of the choir lifted to God in praise and glory. 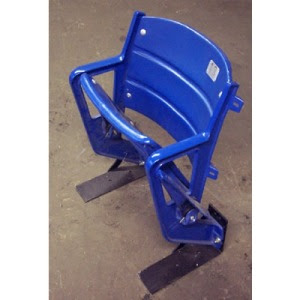 So it was as I walked for the first time onto that glorious field of dreams that was Memorial Stadium. Despite the fact that weeds had overtaken the outfield, the windows of the press box were smashed, and the concrete dugouts were crumbling, I was very much walking on holy ground.  In my mind’s eye I could see the stadium packed with a cheering throng. The life, energy, and electricity that once pulsed through the place was much more than a distant memory. The hope and excitement of a little boy once again coursed through my veins and I felt as if my adult self had just been introduced to the childhood version.

But I came to the stadium not just in search of memories but as a sojourner seeking a holy relic. Items from the stadium were being sold and I wanted, even needed, one. I had my heart set on a stadium seat, the kind I used to sit in as a boy, a teenager, and a young adult. I sought a tangible piece of this place that I could take home and cherish forever. For Memorial Stadium was more than simply a place where I learned to love the liturgy and ritual of baseball. It was a place of relationships, memories, and magic.

Even more important than my sporting reminisces, are the memories of time spent with my father. He took me to my first baseball game in 1975, shortly after my family moved to Baltimore. He had absolutely no interest in the game; he was a symphony orchestra conductor after all, but didn’t want to limit my interests because of his own. As it turned out, I fell in love with the stadium and the game of baseball at first sight. And over the years he actually became quite an Orioles fan himself. When he was dying of cancer he wrote me and my brother a letter while he watched the last Orioles game ever played at Memorial Stadium. In it he wrote about his love for us and the sense of peace he felt as he prepared to take leave of this world. He died several months after the final out was recorded and I’ve always associated the death of Memorial Stadium with the death of my father. Its final destruction was like one last shovel-full of dirt being thrown over my earthly relationship with him. I mourn the loss of the stadium, as I do the loss of my father, but I also take comfort in having known them both. 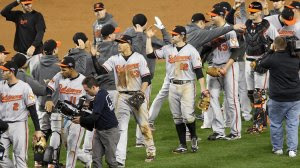 During the Orioles’ American League pennant winning season of 1979, the string of improbable, come-from-behind, last minute victories led to the coining of the slogan “Miracle on 33rd Street.” I think the real miracle is that so many people were brought together through the steel, concrete, and brick that made up Memorial Stadium. My soul was touched and my family, like so many countless others, was nurtured through a public, “secular” structure.

Well, I now have my stadium seat. To my wife Bryna’s chagrin it sits in our family room, though she did manage to keep it out of the living room. I’m not entirely sure what drove me to seek out a piece of the stadium. But I do know that it’s comforting to have in the house. If a religious icon is a window into the mystery of the divine, my new chair is a kind of icon. It serves as a window into a special time in my life and it somehow puts me in touch with a part of my heart that I will always cherish.
Posted by Tim Schenck at 10:15 AM

Email ThisBlogThis!Share to TwitterShare to FacebookShare to Pinterest
Labels: Baseball

This is one of the most beautiful memories I've ever read, especially that of your father taking you to that first game when he didn't even care for the sport. Such memories will become more meaningful and dear with each year of your life.