Even the Angels Weep 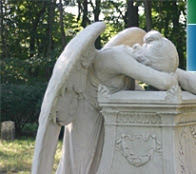 There’s a single image that keeps coming into my head in light of last week’s events at Sandy Hook Elementary School. If you walk down Main Street and head up the hill toward Old Ship Church and wrap around the bell tower into Hingham Cemetery you encounter a particularly striking gravestone. There’s a full-sized weeping angel draped over a sizable stone marker. The angel’s head is down on top of her right forearm while her left arm hangs over the edge with limp fingers pointed toward the earth. Her body language speaks of utter helplessness and defeat and the statue conveys the emotion of profound grief. A grief that transcends words; a grief that is raw and unrelenting. This has been the posture of a nation shocked by the slaughter of 20 innocent children among the dead in Newtown, Connecticut, and I can’t stop reflecting on this angel of grief. And yet even in the midst of this pain, the angel’s wings remain upright and majestic enfolding the grave marker in a gesture of embrace and a symbol of hope.

Faith in the God whose peace surpasses all human understanding doesn’t ease the immediacy of grief. Yet there’s something about a statue so delicately carved into so solid a material. Perhaps it’s a metaphor for the fragility of human life built upon the rock of our salvation. As Christians, we place our faith upon the cornerstone that is Jesus Christ even in the midst of our own questions and doubts and weaknesses.

It’s true that human tragedy strips away the non-essentials of life and brings us right back to the things that matter most -- love, faith, compassion, and companions along the journey with whom we share these things. It’s also a reminder, in these days leading up to Christmas, that this season isn’t just about a cute yet helpless baby cooing in a stable but about our very salvation. It reminds us that Christmas isn’t just about the trimmings and trappings but about the miracle of God entering the world in human form; a world that can feel so full of darkness.

In these waning days before Christmas, I can’t help but think about the gifts that have already been wrapped and lovingly placed underneath the tree; wrapping paper that will never be torn apart; squeals of glee that will never ring out; hugs of love and gratitude that will never be felt. Yet amid this season, amid the darkness that sometimes pierces our world, Christians still point to the light of salvation that burns in our hearts and illuminates the world with peace, hope, and salvation even in the midst of despair.
Posted by Tim Schenck at 7:09 AM

Thanks, Father Tim. The Today Show obviously should have had you in place of that Joel guy.

Thank you, Father Tim. Your words and your angel meet me right where I am today...

Thank you for sharing your reflections on the weeping angel. The picture you posted of her the other day touched me deeply as it did many others who viewed it. I appreciate you sharing your personal connection to her.

Thanks Tim - In the midst of all this madness it's comforting to be reminded that God is ALWAYS with us.

Thanks for your reflection and your picture of that very striking grave stone. I don't remember whose it is, but it is compelling and beautiful.

Inspiring. Thanks for sharing your thoughts with us, Tim

Very Beautiful and inspiring, you put everything in perspective for me. I love the line "Faith in the God whose peace surpasses all human understanding doesn’t ease the immediacy of grief."

Thnak You and Merry Christmas

Fr. Tim, what a beautiful way to remind us of Immanu - el.

Having read your vivid description of the posture of the angel, is there another view depicting the body language? What a striking marker!

Thank you all for your comments -- we're all struggling with this together. John, if you google Angel of Grief you should find other images. The original one is in Italy (1894) I believe. There are several copies in the United States including ones designed by the original sculptor. Here's a blurb about the one in Hingham that includes info about the original: http://www.hinghamcemetery.org/pie_3f.html