The 12 Days of Christmas (The "Real" True Meaning) 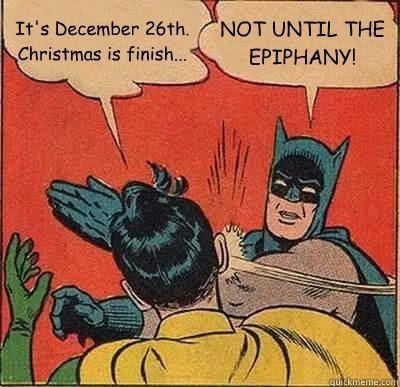 During these Twelve Days of Christmas, you'll see a number of e-mails about the alleged "meaning" behind the traditional carol "The Twelve Days of Christmas." While this is my least favorite Christmas song (shades of 99 Bottles of Beer on the Wall), there is compelling evidence that this was composed as an underground catechetical ditty. So the Four Calling Birds refer to the four gospels, the Six Geese a-Laying symbolize the six days of creation, and so on.

Of course there's equally compelling evidence that this is complete baloney. See the supposed meanings and the debunking on Snopes.com.

Whatever you believe, I have actually done some exhaustive research (and by "exhaustive" I mean that I'm still completely exhausted from all the Christmas services), and have uncovered the "real" true meaning behind this carol.


The Twelve Days of Christmas
(the "Real" True Meaning)

Four Calling Birds -- Four members of the Commission on Ministry

Nine Ladies Dancing -- The one and only time liturgical dance appeared at St. Swithin's

Did you enjoy this romp through the 12 Days of Christmas? It's an excerpt from my book Father Tim's Church Survival Guide. If you're looking for more such silliness, look for it, read it, and give it as a gift so your bishop doesn't spot it on your bookshelf.

I once directed an avant garde version on the Pageant (for which I'm sure I'll pay dearly in the after life) and yet I am not offended. Seems your wit has trumped my embarassment. Most enjoyable.

Remember what wrote in my comment about the Bowl games yesterday.....about Jonathan Winters and Chas Addams? You're getting close !

I just did a search the other day on the song "12 Days" and read the long Wikipedia article, which is pretty interesting, and also debunks the "hidden catechism" idea. Also found the "12 Days of Christmas Local Style", which is a bit of fun for us Hawaii nuts: http://www.islandcandle.com/12daysofchristmas.htm

So, I just got home and checked emails. I think you get this blog but just in case...the partridge in a pear tree comment below was too timely given our post luncheon comments.

Thank you, Fr. Tim ! You brought a smile to my face!

Whenever I'm tempted to say that you've missed your calling I realize that you're exactly where you need to be, providing a much-needed and ongoing antidote to grim piety.

Oh, Father Tim, you are always good for a giggle!