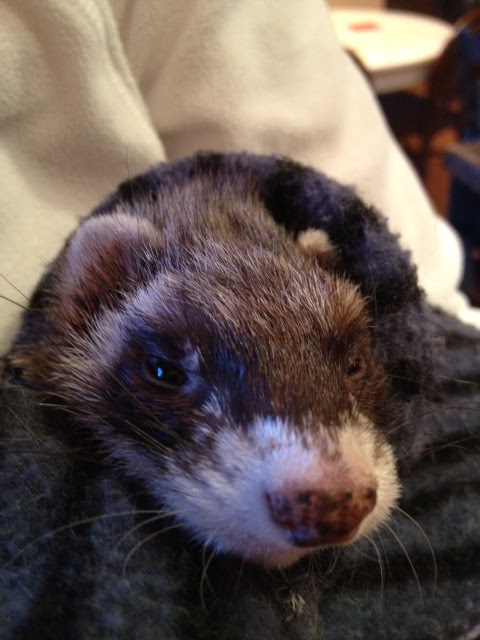 In my latest "In Good Faith" column, I discuss the loss of our beloved ferret Casper in the days after Christmas. And also the importance of modeling for our children healthy ways to grieve.

When a pet dies, it leaves a hole in your heart. For anyone who’s bid farewell to a beloved animal this isn’t exactly a news flash. To love and to lose is to grieve.

We experienced this firsthand in the days after Christmas as Casper, our adorable little ferret  was diagnosed with a fatal liver disease. Yes, I just used “ferret” and “adorable” in the same sentence. Let me explain how we ended up living with not just one but two of these carnivorous mammals (Ferret Ownership 101 teaches you that they are not rodents).

When the boys met two ferrets belonging to a family friend last fall, they quickly became enamored with these cuddly yet mischievous creatures. The next thing I knew we had a giant cage set up in our family room and had adopted two ferrets from Rhode Island. This is what happens when you dare to blink around our house.

Casper and Mimi, as the boys dubbed them, were quickly folded into family life. While our dog Delilah defiantly ignored these interlopers, letting them out to run around their playpen became part of the morning and evening routines.

When we received the diagnosis from the vet, the boys were devastated. Actually we were all in bad shape as we processed the news. Didn’t we just send out a Christmas card featuring our entire extended “family?” But I also recognized an important opportunity -- something that will remain part of Casper’s legacy. Modeling healthy and appropriate ways to say goodbye is an important responsibility for any parent and Bryna and I had an opportunity to do just that.

When we shield our children from grief we do them no favors. Yes, there are age-appropriate ways to introduce kids to the concept of mortality. We started the conversation years ago with goldfish -- I’ve conducted more toilet-side burials than I care to remember. We’ve also taken the boys to the occasional wake or funeral of family members or friends, allowing them to ask questions and helping to guide the conversation.

Over the years, I’ve seen families grieve in healthy ways that unite and I’ve seen families grieve in unhealthy ways that divide. When things get nasty it’s often the result of either a broken relationship with the deceased or an inability to face death. For people of faith, death is not the end nor is it the final goodbye. Rather it is an entrance into a larger life and thus death is merely a temporary farewell. This doesn’t make grief un-Christian -- hardly -- but in time it does take the sting of lasting anger and bitterness out of our hearts.

The healthy approach is to acknowledge the pain and the myriad emotions of grief. We let the boys grieve in their own ways and gave them space to do so even while walking with them through our own sadness. We prayed; we talked; we acknowledged the pain and loss we were all feeling. This isn’t a magic formula; it’s not always neat and tidy. But just as God weeps when we weep and rejoices when we rejoice, we can do the same with our children.

Casper’s last day on this earth was all any of us could hope for. He was surrounded by love and compassion and prayers and friends. Jen, whose two ferrets the boys first encountered, stopped by with Mahi and Fenway. While Casper rested comfortably the other three ferrets played, occasionally checking in on Casper. Other friends came through and some of the neighborhood children who knew Casper stopped by to pay their respects. Even Delilah was attentive to Casper, standing guard near his cage in the hours before I took Casper to the vet to be put down.

I’m not comparing a human death to the death of a ferret but the emotions of grief are universal. Pets also communicate in ways that transcend language, allowing us to relate to them on a purely emotional level. When dogs, cats, ferrets, whatever live in our homes we develop special relationships and attachments to them that defy rational logic. But then love itself is hardly rational or logical. 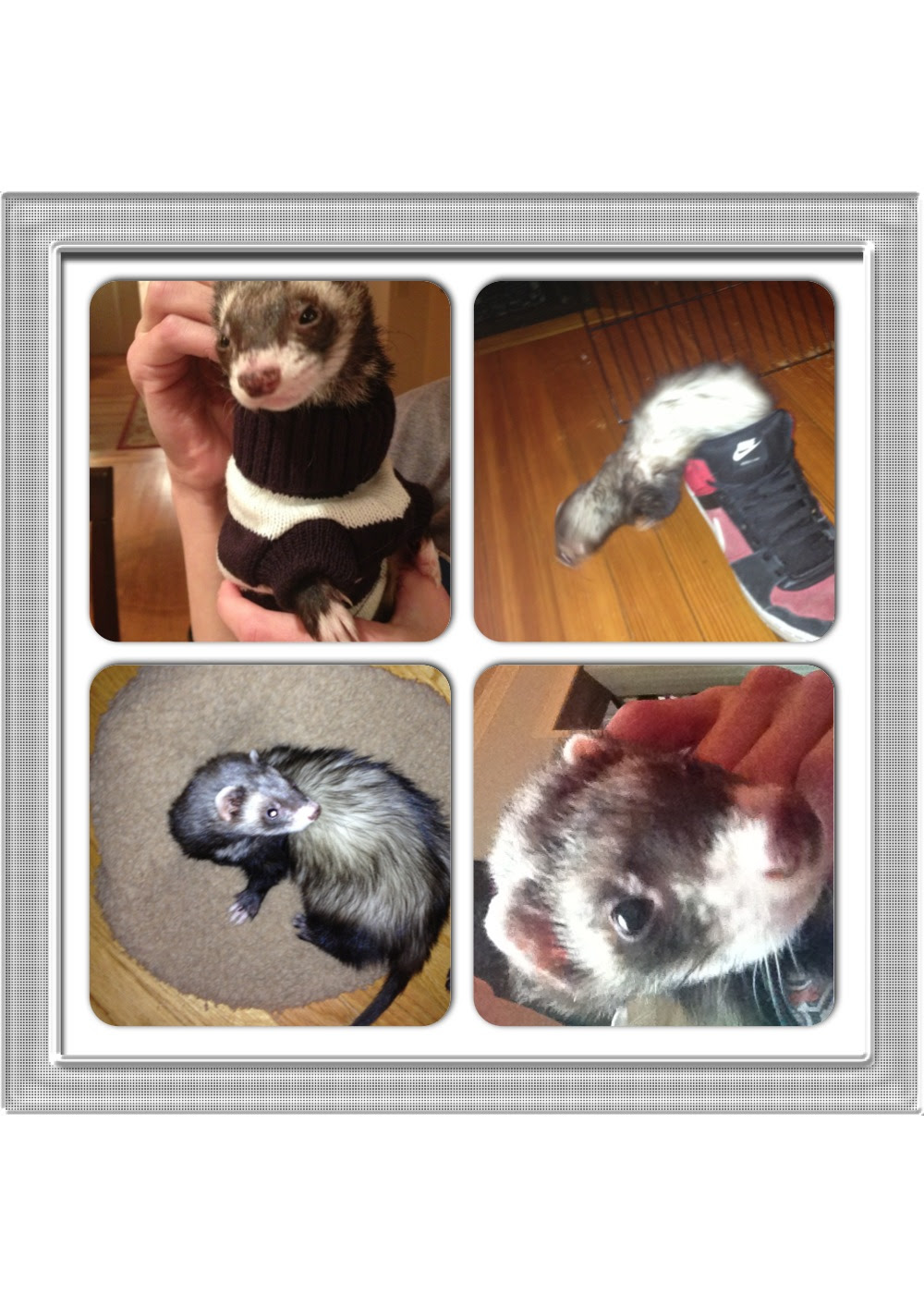 Ben's Casper Collage[/caption]
Posted by Tim Schenck at 3:55 AM

Tim, please let your entire family know I am sorry for your loss. Pets do have a way of being part of our families, and as such we grieve when we lose them in so many ways parallel to when we lose someone related to us.

Growing up we and many of our neighbors had pets - and a road that too often was driven by inattentive drivers. We knew the grief you describe, and so one day when our neighbor's dog was hit and killed, my mother took us with her to share her condolences with our friends - and to offer to the family to bury the dog so that their young children would not be trumatized. For me, it was an important lesson in both service and compassion that has served me as I've had to put my own loved pets down when their time came.

Pets teach us much about love, and life's lessons of loss too. Good for you in teaching this as a healthy lesson.

Thanks, Geof. I think so many of us connect with such stories because of our own personal experiences. We'll be picking up the ashes this week and choosing a backyard burial site.

RIP in Casper and I hope your spirit frolics with those of other beloved pets.

I've stopped being amazed by how these creatures burrow into our hearts, even as they're trashing our furniture. Years later I still weep a bit for pets long gone.

While I'm so sorry for your loss, I'm happy to read, once again, about the sanely sacred way you and Bryna are teaching your boys about life's transitions. You rock as parents -- to the boys and the pets.

Please let Ben know that I love his collage and have returned to it a couple of times.

FYI: I found a vet who comes to the home when it's time for a pet to leave this mortal coil. Extraordinarily powerful, peaceful, and comforting way to say goodbye to a pet and realize how body is just a body and spirit lives on.

Thanks, Meredith. And I'll let Ben know! Pretty touched that the vet sent us a sympathy card.

Thanks Tim for sharing Casper's story. It is so true about love being neither logical or rational. My schnauzer died right before Christmas and I was so touched that one of my friends made a donation to the Humane Society in Schatz' memory.

Tim and family,
I'm so sorry to hear about Casper. Thank you for this post, and good wishes are coming your way from California.

So sad for you and your family. Certainly a story of how God is there in all creation and how true sadness is its own kind of blessing.

Sending you all condolences on the loss of your beloved Casper. May sweet memories bring you comfort.

Truly inspiring and instructional. Nashville is a city where EVERYBODY and their mamas have pets. Those of us who don't aren't considered normal....go figure. But for those families with children and pets, the way you and your wife handled the pet's death was a lesson all parents should emulate.

Had a similar experience in our household with a bunny last year. As a family, we walked through the grief together. I hope that as our sons get older, this will have been a foundation for learning a healthy grieving process.