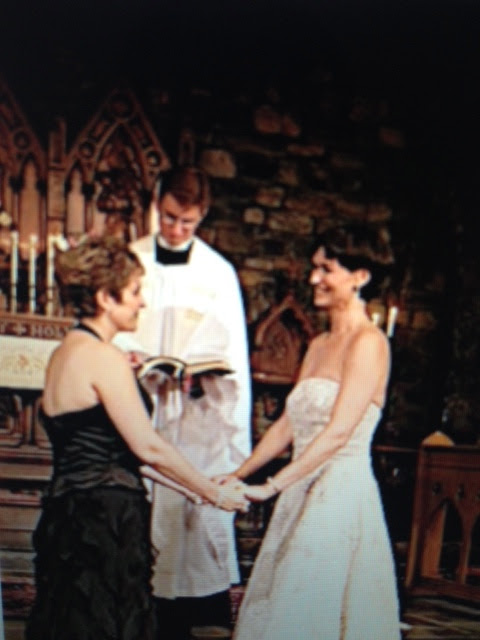 In light of today's Supreme Court decision to repeal the Defense of Marriage Act, I've been thinking a lot about Lisa and Fiona. In the days before gay marriage was a viable option for same-sex couples, clergy were occasionally asked to perform "blessings." Sometime these were even done in the context of a house blessing since many weren't ready to bless these couples inside the four walls of a church.

These issues sound almost quaint in light of the recent progress toward marriage equality but these were high stakes, emotionally-charged times. I officiated at a same-sex blessing while a priest in New York and, with the couple's "blessing," I wrote an article about the experience that appeared in the Episcopal New Yorker. I share it with you here as I rejoice with the many gays and lesbians who simply want respect, dignity, equality, and perhaps an over-the-top wedding cake.

“You two are nothing if not liturgically challenging,” I commented to Lisa and Fiona as we met to plan the blessing of their union. An interfaith same-sex blessing is not in the Book of Common Prayer. I looked.

Fiona, South African by birth, is a lifelong Anglican and a member of the All Saints’ vestry. Lisa is a self-described “Jewish Episcopalian.” Though she has not converted to Christianity, she and Fiona attend church together each week, pledge, and take their turn hosting coffee hour. Fiona’s daughter enthusiastically participates in our Sunday School program.

When they first approached me about performing a blessing, I admit I was slightly taken aback. Theological considerations in the abstract often have little relationship to concrete situations. I presumed such a request was inevitable and had formulated various responses, but the hypothetical never included faces. Suddenly this was more about two faithful parishioners than any General Convention debate. And it is why, after much prayer, consultation with the bishop, and conversation with my wardens, I agreed to conduct the service. Knowing Fiona and Lisa, praying with them, serving God with them, I became increasingly convinced that no other pastoral response was possible.

The service itself was not a political statement. It wasn’t about two women who had a tangential relationship with the parish. It wasn’t a publicity stunt. I didn’t call the press for “look-at-how-progressive-we-are” coverage. Lisa and Fiona didn’t send an announcement to the Style Section of the Sunday New York Times. Rather, it was a bold statement of love and commitment. A statement of Fiona and Lisa’s love for one another and a statement of Christ’s love for us all.

Fiona and Lisa could have made this statement in a variety of locales: a garden, a gazebo, a beach, or a courthouse. But they wanted to make this statement of love in their spiritual home. They wanted to share the moment with their friends and family, with their community of faith, in the place that has played such an integral role in their individual and collective spiritual journeys. And I couldn’t imagine denying them this simple yet profound request.

The liturgy evolved over time. And I was pleased at how much care and attention Lisa and Fiona paid to the ceremony. It was a carefully planned liturgy. Several resources for same-sex blessings exist; some are helpful, some are miserable. But none of them include the breaking of the glass. With input from the rabbi who assisted at the service, we put together a unique liturgy. One with dignity and joy, but above all one that sought to capture the abiding love of God for two faithful people seeking God’s blessing upon their union.

I’m not sure how the issue of same-sex blessings and even gay marriage will be resolved within the wider Church. All will be revealed in time. But I do know that I stared blankly at the parish register for quite some time following the service. It was not a “marriage.” Civil law and Church canons make this clear. But this liturgy was much too meaningful for Lisa and Fiona and all who witnessed this celebration to be classified under “Other Services.” There was nothing “other” about it.

Later that evening at the reception, as my wife and I danced the night away at Lyndhurst’s carriage house, I had the overwhelming conviction that God’s presence had hovered over the entire evening. There was a transcendent holiness that seemed to stop time and rest, if ever fleetingly, over those who had gathered in the presence of God to witness and bless this union. This was a celebration of love, commitment, and faith. And as a priest, it was a privilege to participate in a seminal moment in the lives of two wonderful and faithful people.
Posted by Tim Schenck at 12:07 PM

I don't understand how committed Christians can embrace this. Yes, I know we are to love everyone through Christ, and I do. I don't think gays should not be allowed in church- quite the contrary. But they should be prayed for! Christ is the bridegroom; we are to be the bride. We were meant to be joined with the opposite sex. One man, one woman. That is God's design; just look at the plumbing! God designed our hearts and bodies this way for a purpose. If we decide what marriage is, then why not 2 wives and a dog? Or 3 husbands and a cat. Those who truly know Jesus, know that He did not intend this to be.

Thanks, Elizabeth, for your perspective. Obviously I disagree. I believe Christ's love for all of humanity transcends the "plumbing."

Thanks, Tim, for your reminiscence and response -- light and yet true to who we are called to be as Christians -- and Episcopalians. Today is a day to celebrate, thanks to SCOTUS, whether you're straight or gay. I hope there are lots of over-the-top wedding cakes in the works.

Well, for what it's worth, I agree with Fr. Tim, and would say also how fortunate he was/is to have such a supportive bishop.

A dog or cat cannot give consent, as a human can.

I respect Fr. Tim too much to respond to the plumbing comment, although I have a response. (You're welcome, Fr. Tim.)

A wonderful account of liturgy. I must say, you summed it up in a comment above regarding Christ's transcendence of plumbing.

If marriage were all about plumbing and procreation, then infertile and elderly (presumably infertile!) couples would be out of luck. The Bible talks about faithful, consensual, faithful, covenant relationships--between God and human beings and between one another. If you go with the Bridegroom and Bride analogy, that would make ALL of us--male and female--the bride! I don't really feel like a bride. In any case, faithful Christians of good will disagree on this and probably will continue to do so.

God's blessings on you and that lovely couple. lt's good they were/are not in Tennessee. I had a feeling when I first discovered LENT MADNESS that there was more to you than just a top-flight brain and true quirkiness. Bob Chapman, my response to the plumbing remark can top yours any day of the week ! (You're welcome, Fr. Tim.)

What a lovely account of a moving blessing. I have known committed and loving same sex couples whose commitment over the decades, as well as the wonderful children whom they have raised, demonstrate a faithful Christian commitment and witness that is as beautiful as any other. Great day! You have said it well: we are moving to a more perfect union. Praise God. It is about time.

An excellent article, thanks!

So Father Tim, I am curious. I've been an Episcopalian since birth (1957) and a born again Christian since 1976. Why was this not an issue in the previous decades? You didn't hear about this in the 60s, 70s, etc. Did someone at seminary decide all the biblical teachings were incorrect? Or, did the Episcopal church always embrace homosexual marriage and no one knew. Not being sarcastic, I really want to know. Or, did the Episcopal church just cave to Hollywood and political correctness? I'd like your opinion. What do they teach about it in seminary now, if anything?

I am Fiona in Fr. Tim's article and my partner and I were overjoyed to have our commitment ceremony in our church, with the opportunity to make our vows in front of our God and our community. We were stunned and blessed by the holiness of the day.

My relationship with Lisa, and experiences in/with the world during my relationship with Lisa, have taught me much about love, commitment, compassion and faithfulness. Sometimes the experiences have to come calling a number of times for me to get the lesson (not always being the swiftest!) but God is good (or at least determined) and keeps on sending them. One thing I am starting to learn by "being gay", being in relationship with God and being in love with Lisa (some days even all at the same time) is the scale and complexity of love. Love is huge! And critical for our world. Jesus calls us into committed relationship with Himself, and to love one another with a deep love, modeled on His own. Even when our logic-seeking human minds cannot fully understand love and all that it entails, we are called to do love anyway. To practice it, hand it out freely, receive it gladly, and to pick ourselves up and try again when we fail and get bogged down in fear.

I remain in awe of the amazing love that God has given me, and the opportunity to learn from that love more about how to love others. And I am grateful to the church that has held us during the journey.