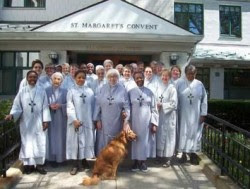 What songs do you listen to when you drive down to meet a bunch of nuns? This was my dilemma last month as I went to visit the Sisters of St. Margaret in Duxbury, an issue I write about in my latest In Good Faith column. Read on to discover my soundtrack and prepare to meet some pretty special ladies.

I’ve been hanging out with a bunch of single women recently. It’s okay, you can tell my wife -- they’re nuns. A number of the Sisters of St. Margaret have been attending services at St. John’s the past few months and they recently invited me down to visit their convent on the South Shore.

This may come as a surprise on several fronts. First, there are indeed Episcopal nuns -- Roman Catholics don’t have a monopoly on religious orders. In fact there are many Episcopal monasteries and convents throughout this country and the world. They don’t fit the Nun-zilla image portrayed in movies such as Sister Act or the Blues Brothers and I’ve yet to see one of them sneak a ruler into church.

The second thing that may surprise you is that their convent is located on a large parcel of waterfront property in Duxbury. Any developer would surely drool over their location, imagining several mansions and lots of money exchanging hands. Don’t get your hopes up -- they’ve owned the property since 1903.

As I began my drive down to meet with the order’s Superior and her right hand nun, I had an important decision to make, namely what soundtrack would accompany me on my 35 minute drive? I decided on a mix of Twisted Sister, anything by Sister Sledge, and “Sister Christian” by Night Ranger. I decided against Billy Joel’s “Only the Good Die Young” and Elvis’ “Little Sister.”

So what are a group of habited nuns doing in an upscale suburb on Boston’s South Shore? I’ll tell you what they’re not doing: lounging around on the beach having mai tais delivered by the novices. Though headquartered in Duxbury, they have Sisters serving in Dorchester, New York City, and Port-au-Prince, Haiti.

They’ve long been engaged in mission work in Haiti, arguably the poorest country in the world. Indeed, they’re currently set up in temporary housing as their convent in Port-au-Prince was destroyed by the devastating 2010 earthquake. Much of their ministry is focused on the needs of children and the elderly. In particular they administer a scholarship program for children unable to afford the basic supplies needed to attend school or whose families cannot pay the minimum fees required.

As with many monastic orders, the sisters also offer a ministry of hospitality, hosting groups and individuals at their newly-built residence in Duxbury. They are available for spiritual counseling, run retreats and quiet days, and offer a respite for those seeking some time to attend to their spiritual lives.

I guess the last thing that might surprise you about the sisters is their demeanor. They’re neither dour nor sanctimonious and, believe it or not, they don’t bite! In fact they are delightful, warm, compassionate, dedicated, and, yes, funny.

If you’re interested in finding out more about the sisters, check out their website at ssmbos.com (yes, modern nuns have websites). I encourage you to contact them for a visit to the convent or even to donate money to support their ministries -- all of which you can do via their web page. I guarantee your life will be transformed by the encounter.

Just when I think I've pretty well figured you out you veer off into a totally new and quite different space. So....keep it up and challenge the rest of us to venture out into ne and uncharted territories.

St. John's gain is the loss of several Boston churches, as the Sisters used to visit and help in and around the city before their convent and property in Roxbury was sold. Several of the sisters would travel by T to Grace Church, Everett when we were reaching out to the many Haitian folks in our city. Getting to know them was a privilege.

So lovely! I pray our church doesn't take against our women religious as the church of Rome seems to have done. Most unlikely.