Why a Pink Candle in the Advent Wreath? 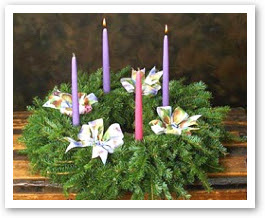 Few things get church folks more riled up than a conversation about what color candles to use in the parish Advent Wreath. All purple, all white, all blue, all red, three blue and one pink, three purple and one pink, or some other color combination. And that's even before the discussion over whether or not to add a Christ Candle in the middle on Christmas Eve. I know one rector who was even accused of "ruining Advent" for using the "wrong" color of candles one year. Of course this is all high on Jesus' list, I'm sure.

In my parish, we use three purple candles with a pink candle lit on the Third Sunday of Advent. This is the traditional practice in most, by by no means all, liturgical churches. We don’t do this for aesthetics — we’re not trying to prep out by getting our Talbots on (yes, I live in Hingham, Massachusetts, home of Talbots). Nor is it because the males among us need to demonstrate just how secure we are in our masculinity. No, that third candle is pink (or technically rose-colored) because it’s Gaudete Sunday. Huh?

Okay, let me back up and do some explaining here. First of all, we refer to the Third Sunday in Advent as Gaudete Sunday because the introit for the mass begins “Gaudete in Domino semper: iterum dico, gaudete” meaning “Rejoice in the Lord always: again I say rejoice.” While much of the penitential nature of the season has been lost in favor of hopeful expectation, some of the readings still do sound this note. The Third Sunday has traditionally been a respite from the penitential themes of Advent emphasizing instead the joy of the coming of the Lord.

Thus many view the pink candle as emphasizing joy. As with most things liturgical, however, there is not consensus here. Some associate the candle with Mary and perhaps there’s confusion because “Mothering Sunday” — the Fourth Sunday in Lent — is the other occasion for rose-colored vestments. This is a slight misnomer, however, because Mothering Sunday refers not to Our Lady but to an old practice in England where the rich gave their servants the Sunday off to go home and visit their mothers. Indeed, Mary appears in the readings for the Fourth Sunday in Advent, not the third. And, yes, some parishes light a pink candle on the Fourth Sunday of Advent rather than the Third, further muddying the waters.

As I mentioned, some churches use rose-colored vestments twice a year — on the Fourth Sunday in Lent and the Third Sunday in Advent. Both days are seen as times of refreshment, feasting, and joy amid a penitential season. I know a priest who, back when he was a curate, always celebrated the Eucharist on these two days. It seems the parish owned a rose set and the rector declared he never, ever wanted to wear pink at the altar!

So there you have it — a brief explanation about the pink candle that will be lit this Sunday. A least in some parishes. May this season bring you the joy of Christ as we continue in hopeful anticipation.
Posted by Tim Schenck at 2:41 PM

So relieved to see you invoke the color description "rose," because even more vituperative than the violet v. sarum blue conversation is what happens when vestments are characterized as "pink."

Thank you! You clarified many rose mysteries for me.

I recognize a few folks in that photo!