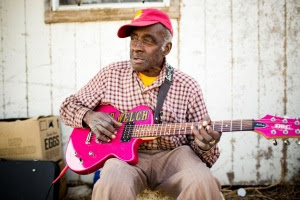 In this month's In Good Faith column I sing, or at least write about, the blues. I've long been a blues fan and it's what I've been studying ever since I started taking guitar lessons for the first time since high school a year and a half ago. So it was great to go hear some live blues in a local church last week, meet Bud Welch, hear his story, and most importantly listen to him get his "mojo workin'."


“The devil’s music.” That’s how the blues has long been characterized. So what was I doing siting in a church listening to the blues last Sunday afternoon? Well, I’ll get to that in a minute but first it’s interesting to reflect on why the blues acquired this reputation.


It may be because temptation is a recurring theme in many blues songs. It’s said that you can’t really sing the blues unless you’ve first “danced with the devil.” That doesn’t literally mean doing the fox trot with a guy in a red suit but it’s a recognition that evil is alive, well, and thriving in our midst. There are also classic blues standards with titles like “Hell Hound on my Trail,” “Devil’s Got the Blues,” and “Devil Sent the Rain.” 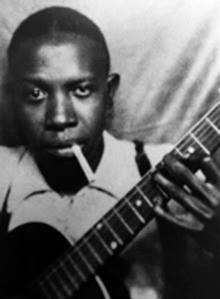 One of the main reasons, however, is the well-known myth surrounding blues great Robert Johnson who died in 1938 at the age of 27. One of the first blues artists to be recorded, he was a major influence on musicians such as Eric Clapton, Mick Jagger, and Bob Dylan. It’s said that his extraordinary talent, with no formal training, was a result of a meeting with the devil at the crossroads of Highways 61 and 49 in Clarksdale, Mississippi, where he sold his soul in exchange for guitar-playing prowess.

As a big fan of the blues and a Christian, I naturally don’t subscribe to the idea that it’s the “devil’s music.” This is why I was delighted that the Hingham Congregational Church recently held a concert featuring 82-year-old Mississippi bluesman Leo “Bud” Welch. His is a remarkable story: Born in Sabougla, Mississippi, in 1932 he first picked picked up a guitar in 1945 -- his older cousin’s instrument that he was expressly forbidden to touch. Eventually he was caught but his cousin was impressed by his ability and let him continue to play.

By the age of 15 Bud was playing publicly but for most of his life he made his living as a logger, hauling a chain saw up and down the hills of North Mississippi. He remained an undiscovered talent for years until recording his first album, Sabougla Voices, this January, two month’s shy of his 82nd birthday.

As I sat enthralled listening to Bud Welch’s playing and singing, I started thinking about the season of Lent. We’re in the midst of the Church’s 40-day season of penitence and self-examination that serves as preparation for Easter. Lent is based on Jesus’ experience in the wilderness that followed his baptism in the Jordan River and preceded the start of his public ministry. During this time, we read in Scripture, he was tempted by the devil yet did not sin. So perhaps listening to the blues in a church is particularly poignant during Lent. Jesus can relate to us and understand our own struggles because he knew them first-hand. And even when we give in to temptation, as we inevitably do, Jesus still loves us despite our weakness.

Bud Welch doesn’t think of the blues as the devil’s music but rather as “a way of expressing the highs and lows of one’s life through song.” I couldn’t agree more and this is precisely why I’m so drawn to the music. I don’t think of the blues as depressing -- indeed there are moments of joy and triumph in the genre along with heartache and pain. In a word, the blues is life. Our lives are full of hills and valleys leading to a rich topography of experience. If you aren’t familiar with the blues, I encourage you to give them a listen. Reflecting on the tough times and temptations of our own lives always makes the resurrection on Easter Day that much more powerful.
Posted by Tim Schenck at 7:07 AM

And sometimes singing the blues--or any sad song--can actually make you (or at least me) feel better. I guess singing gets the pain out in the open. Maybe it's the musical equivalent of having "a good cry".

The "blue note" has always spoken to me. Also, blues and jazz - developed by African-Americans - are distinctively American forms of music that have spread around the world.

I love the blues. Specifically, piano blues, but really any type of music with blues origins. And live performances, OF COURSE. Not jealous at all, nope, not at all.