What's up with the pink candle in the Advent wreath? 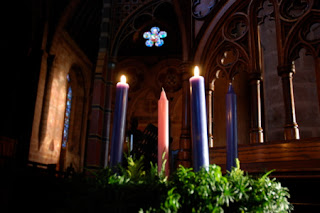 Few things get church folks more riled up than a conversation about what color candles to use in the Advent wreath. All purple, all white, all blue, all red, three blue and one pink, three purple and one pink, or some other color combination thereof.

And that's even before the discussion over whether or not to add a white Christ Candle in the middle on Christmas Eve.

I know of one cleric who was even accused of "ruining Advent" for using the "wrong" color of candles one year (Spoiler Alert: Jesus still came).

And let's not get started on those liturgical factions crusading for either blue or purple vestments and altar hangings during Advent. I'm not even going to touch that holy war.

Of course this is all very high on Jesus' list. Fortunately, I'm confident that when he returns to judge the world at the Second Coming (cue Lo, He Comes with Clouds Descending), all will be revealed.

But back to the issue at hand: the pink candle (and, yes, I know it's technically a "rose" candle, so relax).
At my parish, we use three purple candles with a pink candle lit on the Third Sunday of Advent. This is the traditional practice in most, but by no means all, liturgical churches. We don’t do this for aesthetics — we’re not trying to add an "accent" candle. No, that third candle is pink because it’s Gaudete Sunday.

Huh?
Okay, let me back up and do some explaining here. First of all, we refer to the Third Sunday

of Advent as Gaudete Sunday (pronounced gow-day-tay) because the introit for the mass in Latin begins “Gaudete in Domino semper: iterum dico, gaudete” meaning “Rejoice in the Lord always: again I say rejoice.”

While much of the penitential nature of the season has been lost in favor of hopeful expectation, some of the readings still do sound this note -- something retained in the seasonal collects (which my archenemesis, Scott Gunn, once memorably blogged about). The Third Sunday has traditionally been a respite from the penitential themes of Advent emphasizing instead the joy of the coming of the Lord.
Thus, many view the pink candle as emphasizing joy. As with most things liturgical, however, there is not consensus here. Some associate the candle with Mary and perhaps there’s confusion because “Mothering Sunday” — the Fourth Sunday in Lent (aka Laetare Sunday) — is the other occasion for rose-colored vestments.

This is a slight misnomer, however, because Mothering Sunday refers not to Our Lady but to an old practice in England where the rich gave their servants the Sunday off to go home and visit their mothers. Indeed, Mary appears in the readings for the Fourth Sunday of Advent, not the third. And, yes, some parishes light a pink candle on the Fourth Sunday of Advent rather than the Third, further muddying the rose-colored waters. 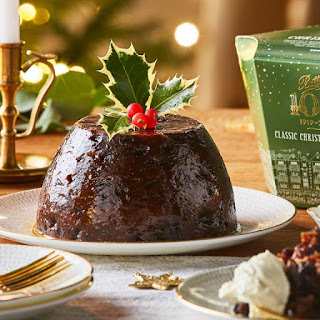 And just ignore, for now, the fact that many colloquially refer to the Third Sunday of Advent as "Stir-Up" Sunday, based on the Collect of the Day:

Stir up thy power, O Lord, and with great might come among us; and, because we are sorely hindered by our sins, let thy bountiful grace and mercy speedily help and deliver us; through Jesus Christ our Lord, to whom, with thee and the Holy Ghost, be honor and glory, world without end. Amen.

Stir-Up Sunday also refers to the fact that in England this marked the day when Brits made (or "stirred up") their Christmas puddings. In the first Book of Common Prayer of 1549, this collect (prayer) was appointed for the last Sunday before Advent. In the 1979 American BCP, this was moved to the Third Sunday of Advent. Those who still make the traditional Christmas pudding tell me that if you wait until that close to Christmas, the pudding will be a disaster. Oh, fine. Here's a link to some Christmas pudding recipes.

To go even further back, it’s worth looking at the history of Advent wreaths themselves. There is evidence that some pre-Christian Germanic people placed candles on wreaths in the middle of winter as symbols of hope that the warm weather of spring would return. And ancient Scandinavians placed candles on wheels in “the bleak mid-winter” as an anticipatory devotion to the sun god. It wasn’t until the Middle Ages that Christians adopted the practice of the Advent wreath as a pre-Christmas devotion. So when we get our garland all twisted up in knots over such liturgical practices, it's helpful to remember that we're really arguing over coopted pagan rituals. Isn't perspective great?

As I mentioned, some churches use rose-colored vestments twice a year — on the Fourth Sunday in Lent and the Third Sunday of Advent. Both days are seen as times of refreshment, feasting, and joy amid penitential seasons. I know a priest who, back when he was a curate, always celebrated the Eucharist on these two days. It seems the parish owned a rose set and the rector declared he never, ever wanted to wear pink at the altar (no comment on being secure in one's masculinity and/or issues of ecclesiastical patriarchy).So there you have it — a brief explanation about the pink candle that will be lit on the Third Sunday of Advent. At least in some parishes.
And if any of this gives you pause, remember that there's also an old tradition that believes the four candles represent the Four Last Things: Death, Judgment, Heaven, and Hell. Which, I'm sure, leads to some pretty fun dinnertime conversation.
However you decide to approach the symbols of Advent and incorporate them into your spiritual life, may this season bring you ever nearer to the joy of our Lord's impending birth.
Posted by Tim Schenck at 12:06 PM

I'm going to be preaching on that Sunday, and with this blog in mind will steer clear of the entire subject. Thanks Tim!

Actually, with the Baptists cry about a brood of vipers I'm trying to practice articulating calling anyone an asp. . .

Monica Mullholand said...
This comment has been removed by the author.
8:03 PM

Anyone who has grown up Roman Catholic knows that pink is not a Marian color. Blue is....Marian blue.

Anyone who has grown up Roman Catholic knows that pink is not a Marian color. Blue is....Marian blue.


"Actually, with the Baptists cry about a brood of vipers I'm trying to practice articulating calling anyone an asp. . ."

Every Baptist church in town is concerned about snakes?

This reminds me of a custom in our parish for a time of observing the celebration of Santa Lucia, a big item in Scandinavian countries.
Commemorating how Lucia brought food to hiding Christians wearing candles on her head for illumination, those four candles resemble the wreath spoken of here. And I must say, though I'm not of Scandinavian extraction, seeing that innocent young lady in white with candles in her hair (electric today) made it difficult to continue singing the verses of "Santa Lucia."

It was pleasant to be once again reminded of "Stir up Sunday." My Grandmother of blessed memory used to refer to it, with a gentle smile and a wink.

Sailors get lit. Candles get lighted. That's what my rector taught me.

Of course, "Stir up" Sunday was always Trinity 25, the Sunday Next Before Advent. The 1979 Collect lightly revises and modernizes Cranmer's old 4th Advent collect and then borrows the "Stir up." It's a little late to get working on those Christmas fruit cakes!

And it usually falls on or close to the Feast Day of Our Lady of Guadalupe.