In the March edition of my In Good Faith column, I write about the virtues and vices of cursing. Well, mostly I don't care whether you curse or not. With a few exceptions. 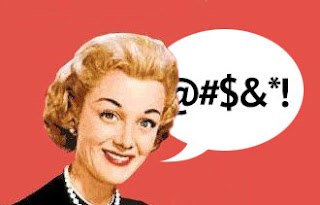 Many years ago I knew a grizzled priest who had been an infantryman during the Korean War. He was a faithful pastor and one of those guys who would literally give someone the shirt off his back if he met someone in need. You could always tell when he was around though, because he used to, well, curse a blue streak. When asked about his salty use of language, he used to say, “Jesus converted every part of me, except my tongue.”

I personally don’t curse much but I’m not really bothered by it — save for places like the local playground or in the middle of worship. I prefer to use old-timey oaths like “criminy!” and “egad!” Partly because they’re more socially acceptable but mostly because they’re a source of embarrassment when my teenagers overhear me.

Well, there was that minor incident when I came home on leave from Fort Knox for Thanksgiving dinner one year and midway through the meal casually asked my brother to “pass the $*&^#^% mashed potatoes.” That warranted a few raised eyebrows from the great aunts but, in my defense, it can be difficult to extract yourself from the culture in which you’re living.

I can’t tell you the number of times per week someone casually curses, notices my clerical collar, and then hastily apologizes. I rather think God has bigger fish to fry. Like poverty and racism, for instance. And I’m pretty sure I do as well.

This doesn't mean that righteous anger is unholy — frankly, there’s not enough of it in our world. To curse injustice and then do something about it is an act of faith, something the ancient Biblical prophets both embodied and now point us toward.

The reality is that language is a powerful tool. It can be used to raise up and it can be used to tear down. There’s a difference between cursing as a linguistic device or using it as a throwaway part of speech and actually cursing at someone. The latter is indefensible not because of the particular words themselves, but because of the attitude behind them. When we curse at someone we are actively seeking to destroy their soul by minimizing their value as a fellow child of God. Somehow that’s different than saying a bad word when you hit your thumb with a hammer.

This naturally brings up the matter of taking the Lord’s name in vain, something that has apparently been going on since humanity first learned God’s name. I mean, there’s a reason it made the original Top 10 list, aka the 10 Commandments. The negative things we say about God and one another do matter because, as Jesus put it, “the things that come out of the mouth defile.” Why? Because they are a reflection of the heart.

So while it’s no surprise to hear a member of the clergy encouraging you not to take God’s name in vain, it’s more about being mindful of your words. What does your choice of words say about your heart? Perhaps it’s crying out for healing. Or it needs to deal with unresolved conflict or anger.

Or maybe it just feels good to occasionally let loose a string of socially forbidden words. A few recent studies even claim cursing is a good stress reliever. There’s a point of diminishing returns however — those who curse regularly don’t benefit as much as those who choose their spots more judiciously.

Either way, I won’t be too offended the next time I overhear you say something salty when your car won’t start. You don’t even need to apologize.

I definitely find that swearing in the car allows me to get rid of the anxiety that results from responding to bad drivers who cut me off, tailgate me, turn in front of me, etc.... I don't feel the need to swear elsewhere. And I also admit that my go-to phrase is the one my father's father used, which has such a nice and emphatic rhythm. In meter, it is a troche feet, followed by a foot of anapest.

Am I strange in being unoffended by "salty" language, but objecting greatly to language that belittles other people?

This is an interesting post coming from a priest, but who am I to say. I know you know or you should that there are so many scriptures that would completely disagree with pretty much everything you said in this post right? So why write this? I know there are so many more important issues in the world, but this one is so easy to correct, it takes nothing. Even your grizzled priest friend with the heart of pure gold knew it was wrong, with the "Jesus converted every part of me except my tongue" yup I guess Christ just isn't that powerful to complete the full work. I honestly think the entire world and almost every religion would agree that salty language is one of the lowest forms of communication. So maybe let's not try and use it. However studies say it might be a good stress reliever and I know how much importance God puts on studies done. I just feel bad that Jesus himself didn't use salty language because I'm sure he was under some serious stress.