In Good Faith: Subject to Interpretation

In my October In Good Faith column, I share a memory from my fraternity days and and wonder how we can more graciously interpret the events surrounding our upcoming national election. Also, The Kingsmen get a shout-out.

Once upon a time, when I was a fraternity pledge, one of the brothers came up to a group of us and demanded to know the lyrics to the song Louie, Louie. We had one hour to present them. Or else…well I don’t know what, but something bad.

Now, if you know this 1960’s-era classic by The Kingsmen, which has been played by every 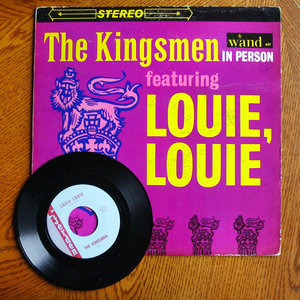 This interaction of brotherly love took place before the magic of the internet. So ten of us crammed into a dorm room and played the cassette over and over again while arguing over the lyrics.

Little did we know that it really didn’t matter. Not only did no living person, including the lead singer, have any clue what the lyrics actually were but by the time we presented our interpretation to the brother in question, he’d forgotten he’d even asked us in the first place. Such was life as a pledge in the Delta Tau Delta house at Tufts University in the late 1980’s.

Interpretation is tricky business — whether of lyrics, literature, or Scripture. Unfortunately, I’m not sure we’ve evolved much when it comes to the interpretation of world and national events. Take the current political climate. Depending on your perspective, one presidential candidate is either a racist bigot or the ultimate truth teller while the other is either a conniving crook or a beloved trailblazer. We’ve become so polarized as a nation, that it feels as if we’re speaking completely different languages. Just log onto Facebook and look at your friends’ disparate opinions for Exhibit A of the twisted state of public discourse.

This doesn’t mean we all have to agree — we’re human after all, with divergent viewpoints and experiences. This kaleidoscope of opinion is the spice of life. But what worries me is that the divisiveness of the interpretation of events has trumped the primacy of our common humanity. From a faith perspective, we’ve lost sight of the fact that we are first and foremost children of God. That’s what binds us together and draws us into a sacred wholeness.

As fraternity pledges, we may have argued over the lyrics, we may have disagreed, we may have even been wrong in our interpretation (surely we were wrong). But at the end of it all, we were brought together by a common bond. I’m hardly suggesting that a bunch of fraternity boys sent on a fool’s errand are a model for lofty dialogue. But the act of interpretation is valuable if we are to move forward in meaningful ways.