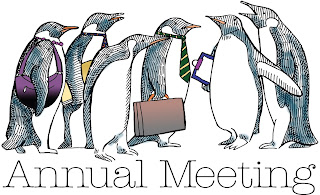 This may come as a surprise, but the Annual Parish Meeting takes place...every year. Ours is always scheduled for the last Sunday in January or, as we call it here in New England, The Last Sunday Before the Patriots Appear in Yet Another Super Bowl.

As at other Episcopal parishes around the country, we gather for a meal, elect Vestry members, and present the budget for the coming year, and allow people to ignore what's actually being said by handing out a comprehensive report of all the ministries just before the meeting. I always like to present a year-in-review slide show which, I think, adds some color, texture, camaraderie, and humor to what can be fairly dry proceedings.

Annual Meeting week always creates a bit of anxiety around the office -- not Holy Week-type stress -- but there are lots of last-minute reports and details to pull together. The copy machine in the parish office gets ridden hard and there's inevitably a complicated pastoral emergency that arises.

Oh, let's be honest. It's mostly the rector's anxiety. I always apologize in advance during the staff meeting in the week preceding the Annual Meeting. I think most clergy in charge of parishes approach the Annual Meeting with the nagging fear that the Vestry will attempt to invoke the church equivalent of the 25th Amendment. That's the one that allows for the removal of the president from office if the vice-president and a majority of the Cabinet deem him physically or mentally "unable to discharge the powers and duties of his office." Not that there is a church equivalent, but that's the level of paranoia that gets unleashed.

Anyway, I've had the Annual Meeting on my mind the past couple of weeks and I have a few "suggestions" to make yours more enjoyable for everyone. Oh, and here's an actual tip that we're doing this year: hiring a magician to entertain the kids while their parents attend the meeting. Definitely steal that idea! 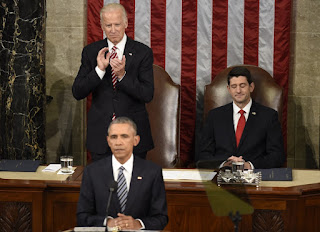 1. During the Rector's Report, have the curate sit behind the lectern and stand up after every few sentences to enthusiastically lead congregational clapping.

2. Have the Treasurer present the budget using "fuzzy math" and "voodoo economics." Basically, keep talking in circles until there's a motion to close the meeting.

3. Encourage the Rector, during the dreaded open discussion portion at the end, to "answer" every question like a Bill Belichick press conference: "We're on to next Sunday morning."

4.  Pray for all the trees you killed by printing all those copies of the Annual Report that is also available online.

5. Remember, if you keep the meeting under an hour, there is a brass plaque waiting with your name on it. Sure, it will be attached to the bottom of one of the uncomfortable metal folding chairs people are forced to sit on during the meeting. But still.

6. If the coffee has run out by the time the rector makes it in to offer the opening prayer, there will be no Annual Meeting (which is either a promise or a threat, depending on your perspective).

7. After the meeting begins, lock the doors. Captive audiences are the best audiences.

8. If the congregation spends 20 minutes debating why the candle budget increased by 1.5% last year, there may be bigger issues that need addressing.

9. Don't entertain any suggestion that begins, "Wouldn't it be really great if we made this a Bi-Annual Meeting?"

10. When the same guy gets up to speak, as he has at the last 35 Annual Meetings, and demands to know why we no longer do Morning Prayer on Sunday morning, consider it a motion to adjourn.

In the end, for as much preparation as it takes, I do love Annual Meeting Sunday. It's a gift to be able to hit the pause button amid the pace and volume of parish life and both celebrate the last 12 months while looking ahead to the future. Blessings to all who have upcoming Annual Meetings. May your budget be balanced and your attendance figures be up.
Posted by Tim Schenck at 4:37 PM

Excellent tips. My best time for an AGM was just under 40 minutes, actually (coughs modestly). Hereabouts we began to make it a tradition that the AGM was ON Super Bowl Sunday, which expedited things really well. We had an informal but vigorous competition from year to year as to which parishioner could rise and utter “imovenominationsbeclosed” fastest.... Ah those were the days. (She says from the depths of a contented retirement!!)