In my August In Good Faith column I write about what it's like to live in the same house with someone who obsessively counts her steps -- and the importance of accountability in the spiritual life.

My wife and I have the ultimate mixed marriage. It has nothing to do with race or religion or 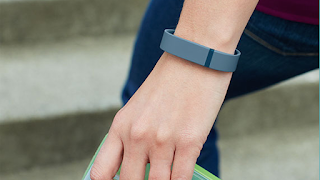 socio-economic class. It’s not that I’m an Orioles fan and she’s a Yankees fan, though I am and she unfortunately is. Or that I hate chocolate and she loves it, which is strange but true. No, our mixed marriage is based on the fact that she wears a Fitbit and I don’t.

At night, if Bryna hasn’t hit her daily goal of 11,000 steps, she starts parading around our bedroom. I’m trying to wind down by reading a novel and she’s marching around the room like she’s in a Russian military parade.

And God forbid she’s behind her three friends from high school, with whom she competes for steps on a daily basis. It may be looking good around dinner time but if her friend Sharon — who has shorter legs which translates to more steps and lives in New York City — gets too far ahead, I get dragged out for another trip around the block. Sharon still always wins, but at least her margin of victory is a bit more respectable.

We all need accountability in our lives. Whether it’s through friends or devices or goals, or a combination of all three, accountability is important. When all you want to do after work is come home, crash on the couch, and binge watch Orange is the New Black on Netflix, it helps to have a motivating outside force. For Bryna, and by extension me, even though it’s against my will, the accountability comes from that little device she wears around her wrist. Have you embraced a healthy lifestyle today? Or have you embodied the virtues of the three-toed sloth? The Fitbit doesn’t lie.

In the end, it’s about discipline. Discipline is a word that often makes us uncomfortable. We either think of being sent off to military school or being punished. But I love the fact that the word “discipline” shares the same root as the word “disciple.” It’s not about punishment, but about following faithfully and embracing practices that are life-giving.

It’s why people of faith speak of prayer and worship as spiritual disciplines. Such devotions help keep our respective relationships with God in shape. Perhaps we could use a Fitbit for faith to remind us if we’re neglecting our prayer lives or skipping church too often. A device that would keep us accountable to our relationship with the divine, not out of guilt but out of that deep love that God has for each one of us.

I wish I could claim complete freedom from Bryna’s Fitbit. I’d love to say I don’t believe in such ridiculous accountability to an electronic device; that I am all about free range exercising; that I will never be beholden to a popular fad; that my steps are between me and God, thank you very much. But then I go for a run, making sure never to leave the house without my fancy stopwatch around my wrist. We all embrace accountability in our own ways. And that’s not a bad thing.
Posted by Tim Schenck at 9:03 PM