Now Thank We All Our God (Behind the Music)

This joyful hymn of gratitude wasn’t written because things were going well. It’s easy to be 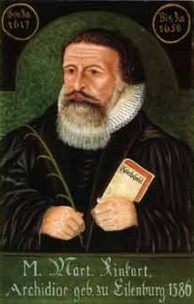 Pastor Rinkart came to serve a congregation in the old walled city of Eilenberg in Saxony at the beginning of what came to be known as the 30 Years War. Now, if you don’t remember your middle school European history class, the 30 Years War was fought in central Europe, amid a swirl of religious and political discord, and was one of the most destructive and deadliest conflicts in human history. Eight million people died through a lethal combination of military engagements, famine, and plague. It finally ended in 1648 with the Peace of Westphalia, but not until after the devastation of entire regions.

Eilenberg became a refuge for political and military fugitives, an oasis of sorts in the midst of a war-torn region. But this brought problems of overcrowding, leading to widespread famine and rampant disease. Eilenberg was also invaded by various armies over the years, causing even more anguish and destruction for both residents and refugees. The suffering is hard to imagine, but when you read stories about throngs of half-starved, plague-ridden townspeople fighting over the corpse of a single dead cat, you get the idea.

Things were tough for Pastor Rinkart as he sought to minister to the people of his congregation and eventually to everyone in the besieged town. In the year he wrote his now famous hymn, there were four pastors in Eilenberg. By the end of that year, one had fled for his life and never returned, while the other two contracted the plague and died, leaving Rinkart as the only pastor in town. During the height of yet another diseased-riddled year, Rinkart was conducting up to 50 funerals a day and in 1637 he officiated at over 4,000 burials, including one for his own wife. With his tenure in Eilenberg paralleling nearly exactly the duration of the 30 Years War, he spent his entire vocational life ministering to others, barely surviving on limited rations, giving away most of what he did have, and having the soldiers who forcibly stayed in his home stealing anything that was left over.

It’s hard to imagine his state of mind in the midst of such despair and heartache. And yet, in the depths of such overwhelming sorrow, Rinkart penned “Now thank we all our God,” a hymn so full of hope and gratitude. Rather than a lament, he summoned the joy emblematic of a deep and abiding faith in Jesus Christ. And I find this remarkably inspiring, much more so than someone writing of God’s bountiful grace while surveying a Thanksgiving table heavy laden with rich foods.

As you gaze upon the bounty of your own Thanksgiving feast, I encourage you to think about Pastor Rinkart and be inspired by his story. Recall that this hymn was composed as a bold statement of faith, not just a nice sentiment about gratitude.

While Rinkart was a prolific hymn writer, he also used this text as a grace before meals with his own family. Perhaps you will use it this way as well. I could think of no better way to give thanks to our God “with heart and hand and voices, who wondrous things has done, in whom his world rejoices.”
Now thank we all our God
with heart and hands and voices,
who wondrous things has done,
in whom his world rejoices;
who from our mothers' arms
has blessed us on our way
with countless gifts of love,
and still is ours today.
O may this bounteous God
through all our life be near us,
with ever joyful hearts
and blessed peace to cheer us,
to keep us in his grace,
and guide us when perplexed,
and free us from all ills
of this world in the next.
All praise and thanks to God
the Father now be given,
the Son and Spirit blest,
who reign in highest heaven
the one eternal God,
whom heaven and earth adore;
for thus it was, is now,
and shall be evermore.

Email ThisBlogThis!Share to TwitterShare to FacebookShare to Pinterest
Labels: Thanksgiving