Bryna and I are not exactly au Courant in our Netflix viewing. We recently started watching Mad Men (about a decade after it debuted) and I've become fascinated with the lives and culture of early-1960's Madison Avenue advertising executives.

The show is brilliant, from the characters to the costumes to the props, it paints a vivid picture of a very different way of life. The blatant sexism, the day drinking, the infidelity, the manipulative power of advertising  -- and we just started season two!

In light of the Me Too movement, Mad Men reminds us just how far we've come -- and how much further we need to go. The interactions between the women in the secretarial pool and the male executives; the expectations around dress and sex; the power dynamic in the home between the men who held the purse strings and the gilded indentured servitude of the female housewives. It's painful and powerful and revealing.

In the research for my forthcoming book on faith and coffee, Holy Grounds, I encountered a number of coffee ads that reflected the culture out of which they were born. I didn't write about these ads because it was out of the scope of my book, but I share them now as a glimpse into the past. When we talk about returning America back to what it once was, this emerges as a piece of that reality.

In these ads, you'll see several common themes: women are always the ones making the coffee; good coffee is used as a tool to please men; women are the ones who will do the shopping; the wise housewife is a thrifty housewife. You'll also notice the emphasis on the traditional male-female nuclear family and a decided lack of people of color.

Hold onto your coffee mugs, friends! 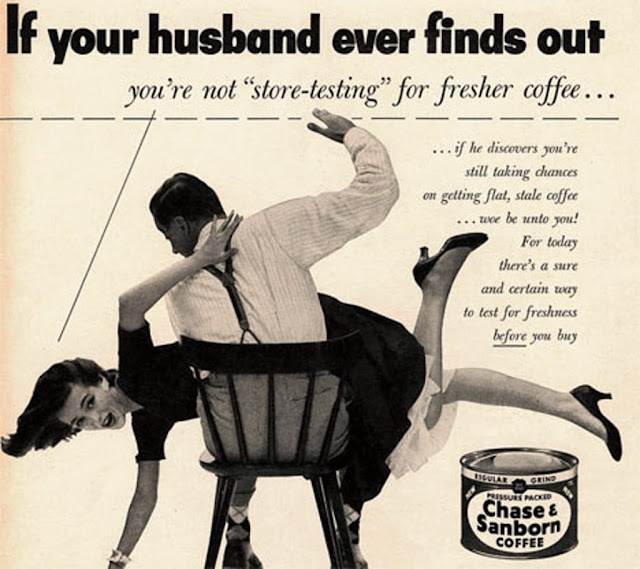 This ad for Chase & Sanborn has to be one of the worst ads ever produced. Nice to see a subtle quote from Scripture with the "Woe be unto you" line. Ugh.

Right. The "key to a man's heart" is richer coffee. 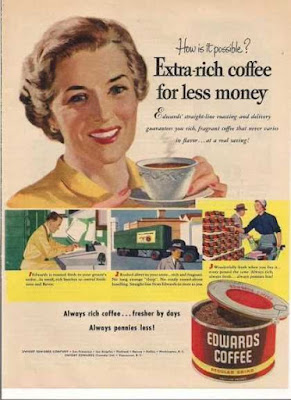 So many ads were marketed to the thrifty housewife, who would please her husband by saving money at the supermarket. Though it's kind of great to see a young Betty White in the ad for Luzianne Coffee. 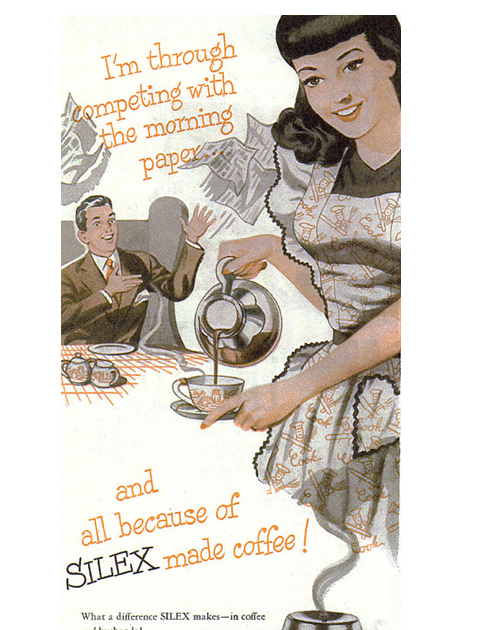 Not an ad for coffee, but for the Silex coffee maker. If only you served better coffee, he would  actually pay attention to you. 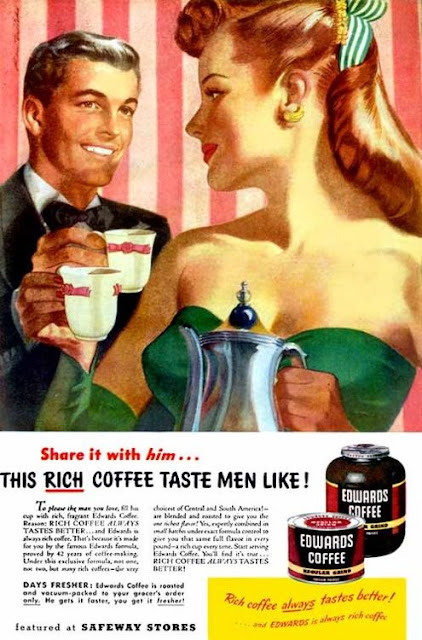 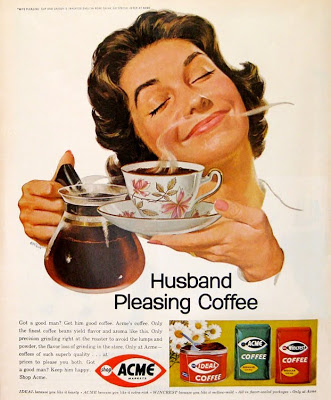 The two ads above, highlight the real point of serving tasty coffee: pleasing your husband. 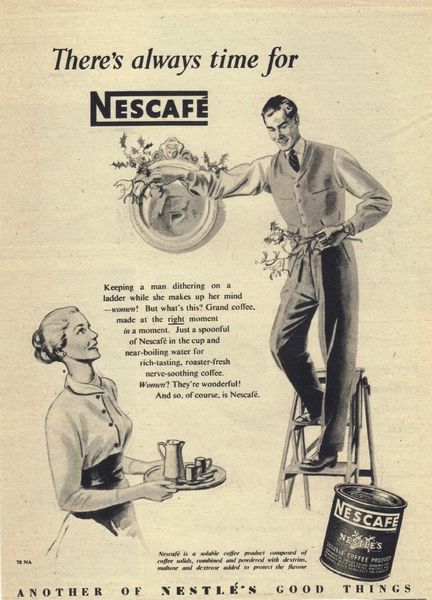 Read the copy: "Keeping a man dithering on a ladder while she makes up her mind -- women!" Yikes. 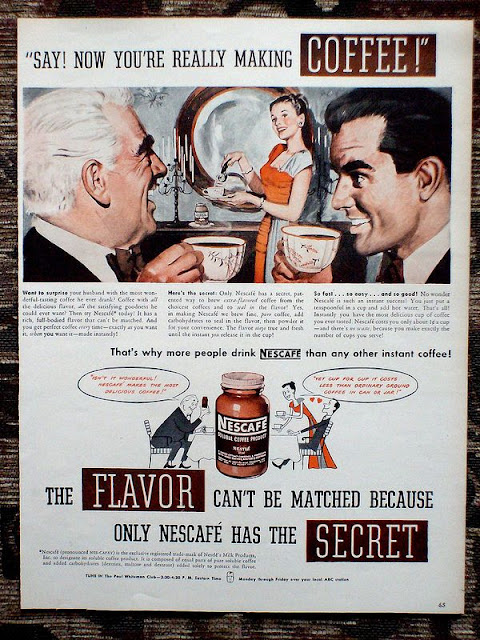 So many of the ads of this era depicted well-coiffed housewives serving coffee to men. In this case, it looks like the boss has come over to the house -- better make a good impression! 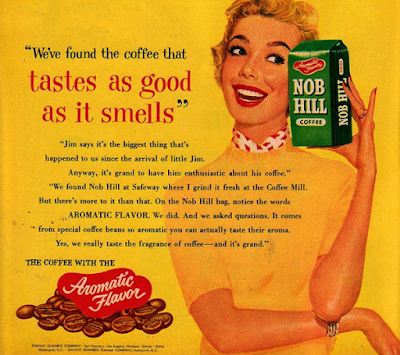 Again, the copy: "Jim says it's the biggest thing that's happened to us since the arrival of little Jim." Um... 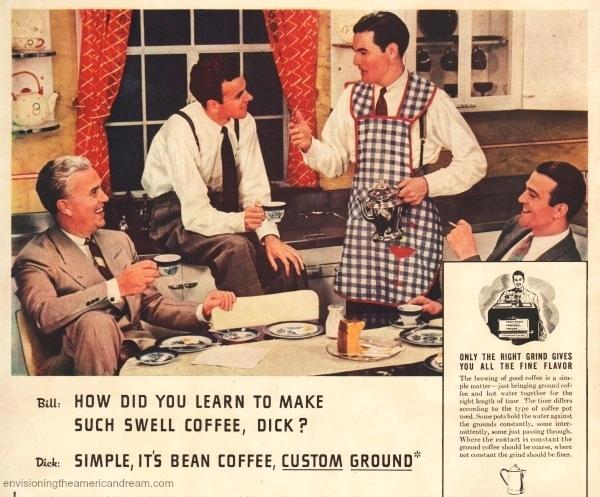 It's so simple, even a man can make it! Notice he's even wearing his wife's apron as his friends laugh at the absurdity of it all. 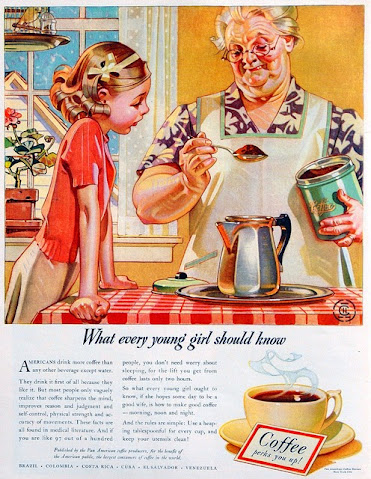 Make sure to pass on the sexism from generation to generation. And of course, all of these ads were written by men.