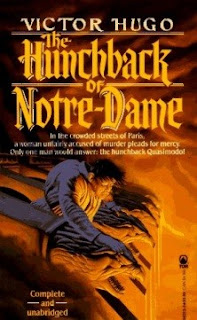 Today on the Facebook Live Sunday morning pre-game show, I mentioned that the Second Sunday of Easter is also known as Quasimodo Sunday. This is one of my all-time favorite pieces of liturgical minutia and I thought I'd take a brief moment to explain why.

The name has nothing to do with a certain French hunchback BUT there is a connection to Victor Hugo's character. I'll get to that shortly.

But the reason the Sunday after is Easter is called Quasimodo Sunday is because of the Latin introit traditionally sung at the beginning of the liturgy: Quasi modo geniti infantes. It's translated as "like newborn infants" and comes from the second chapter of the First Letter of Peter, "Like newborn infants, long for the pure, spiritual milk, so that by it you may grow into salvation."

The reference is to those who were baptized during the Easter service, whether infants or adults. New Christians live into their baptismal vows throughout their lives and this is a prayer for spiritual maturity.

In The Hunchback of Notre Dame, Monseigneur Claude Frollo finds the deformed, abandoned child inside Notre Dame Cathedral on the Sunday after Easter. That's right, on Quasimodo Sunday!

In Hugo's words, Frollo "baptized his adopted child and called him Quasimodo; whether it

was that he chose thereby to commemorate the day when he had found him, or that he meant to mark by that name how incomplete and imperfectly molded the poor little creature was. Indeed, Quasimodo, one-eyed, hunchbacked, and bow-legged, could hardly be considered as anything more than an almost."

So there you have it. A connection to the famous novel, but Quasimodo Sunday is much older than Quasimodo the fictional character.

Oh, and if you're curious about the Latin introit, you can listen to it here.

Email ThisBlogThis!Share to TwitterShare to FacebookShare to Pinterest
Labels: Liturgy