In Good Faith: Tearing It Down

In my July In Good Faith column, I write about Confederate statues, the reality of racism, and Babe Ruth. 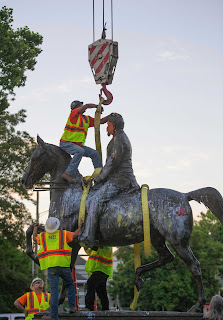 The first statue controversy I remember revolved around the Babe Ruth statue outside the newly-constructed Oriole Park at Camden Yards in Baltimore. No, it wasn’t controversial because it immortalized the iconic player associated with the hated New York Yankees. The Babe grew up not far from the stadium, after all.

Rather, it had to with his glove. The nine-foot tall bronze statue depicts a young Ruth leaning on his bat, while clutching a right-handed fielders glove on his hip. The problem is Ruth was left handed. Not only did he hit every single one of his 714 home runs from the left side of the plate, he was also a southpaw, first as a pitcher and then as an outfielder.

Given the controversies surrounding statues of Confederate generals, in light of the Black Lives Matter movement, the problem of the wrong glove on the Sultan of Swat, seems rather quaint. Since George Floyd’s murder in Minneapolis at the end of May, over 30 Confederate monuments have come down across the country. While some have been toppled by protesters, the vast majority have been removed by state and local governments.

Now, one thing we don’t have in New England are statues of Robert E. Lee, Stonewall Jackson, or Jefferson Davis on our picturesque village greens. So it’s easy to sound self-righteous railing against statues of Confederate generals from the safe confines of Boston’s South Shore. Heck, here in Hingham, we have a prominent statue of Abraham Lincoln, whose ancestors helped settle the town in the 17th century. Of course, that’s not to say racism isn’t just as present in our own communities as down south — that’s one of the great northern myths about racism.

But I do not mourn the loss of these statues, which serve as powerful symbols of a hateful and treasonous heritage of white supremacy. Some claim taking them down “erases history,” as if by virtue of their removal, we’ll forget the lessons of the Civil War. Well, I’m not buying it. History isn’t told through statuary, but story. Much of American history has been whitewashed over the years and many stories have gone untold, but that’s changing. Raising our collective awareness about the unvarnished history of this country is one of the great opportunities of this moment. And this happens not in sculpture gardens, but through open hearts and minds.

I’ve gotten to know the Rev. Rob Lee over the years. Yes, he is a direct descendent of General Robert E. Lee, and he’s become persona non grata in certain circles for his belief that all the statues of his famous forebear should come down. In a recent editorial in the Washington Post, titled, Robert E. Lee is my ancestor. Take down his statue and let his cause be lost, Rob wrote, “Perhaps you’ve heard the mantra, ‘The Civil War was fought for states’ rights.’ The catch is that there’s more to that sentence, something we southerners are never taught: The Civil War was fought for states’ rights to enslave African people in the United States of America.”

This is an important reminder for everyone, regardless of geography. And that’s what these statues stand for. They weren’t erected in the immediate aftermath of the Civil War, but as part of the Jim Crow south to remind blacks to remember their place in a white dominated society. And they need to go.

Referencing the recently removed statue of his ancestor in Richmond, VA, Rob wrote, “The statue is a hollow reminder of a painful ideology and acts of oppression against black people. Taking it down will provide new opportunities for conversations, relationships, and policy change.”

That’s the hope. And we surely don’t need bronze statues of Confederate generals to remind us that the ripples of racism still emanate from the original sin of slavery.
Posted by Tim Schenck at 10:08 AM