In my August In Good Faith column, I address some controversy stirred up in Hingham surrounding the so-called Thin Blue Line flag. It even ended up as a story on NPR.

Symbols are powerful. Take the bald eagle. When most Americans see an eagle prominently displayed on 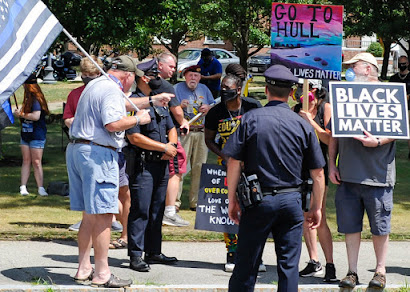 the back of a quarter or on the presidential seal, they see it as a symbol of pride and strength. The eagle, declared the national bird in 1782, has long been part of the iconography of the United States.

Never mind that Ben Franklin allegedly preferred the turkey over the bald eagle as a national symbol. When the eagle flies, on currency or in the emblem of the United States Marine Corps, we wrap ourselves in the imagery of majestic freedom, and we seek to embody the spirit of the eagle in our national mythology.

Yet, the United States didn’t invent the eagle as a powerful symbol. Long before the American Revolution, long before the first Europeans landed on this continent, the eagle was already a revered symbol of courage, wisdom, and strength. Native Americans considered the bald eagle a sacred animal, and eagle feathers were said to hold a connection to the Great Spirit.

In the Bible, eagles are symbols of spiritual strength. The prophet Isaiah writes that “those who wait for the Lord shall renew their strength, they shall mount up with wings like eagles.” If you’ve ever been to a funeral at a Roman Catholic church, you’ve surely heard a soloist sing “On Eagle’s Wings.”

In the 1920s, the Nazi party created a new symbol known as the Nazi Eagle. Depicting an eagle with open wings above a swastika, the Nazi Eagle has since been appropriated by neo-Nazi groups and continues as a popular symbol among white supremacists. Like the swastika, it is used as a cudgel to intimidate and strike fear into the hearts of non-Aryans and those opposed to an ideology of hate and bigotry.

This has been a tough week here in Hingham on Boston’s South Shore. Symbols have been twisted and misconstrued and misrepresented, leading to much division and hurt. The so-called Thin Blue Line flag stirred controversy when town officials sought to remove it from firetrucks and firefighters refused to take it down. Back the Blue rallies were hastily scheduled, resulting in counter protests and calls for unity.

Emotions have run hot, engendered with much passion, and complicated by the two-year anniversary of the death of a police officer shot in the line of duty in neighboring Weymouth. And while justice must always override feelings, it’s hard when neighbor opposes neighbor in the midst of an ongoing global pandemic.

Proponents of the flag view it as a symbol of solidarity with the police; opponents see it as a racist symbol used to counter the Black Lives Matter movement. And there is very little middle ground, indicative of the divided and highly polarized and politicized times in which we live.

Unfortunately, the Thin Blue Line flag has been co-opted by white supremacists in the same way that the Confederate flag has been co-opted. That’s not an editorial statement, but a fact. This doesn’t mean that everyone who flies it is a white supremacist, or that those who care deeply for and support the hard work of police officers shouldn’t be passionate about standing up for them. I know the vast majority of people participating in Back the Blue rallies have good intentions in their hearts.

But it does mean that some white supremacists fly this flag. And when we listen to people of color say that this flag is a cause of deep pain, fear, and oppression, it’s time to take the symbol down. Anything we can do to remove barriers to healthy, honest, and open conversation is worth doing. Especially when so much is at stake.

Symbols are powerful. We all must use them wisely and be aware of their ever-evolving meanings.