In my October In Good Faith column, I write about my recent experience with the RMV and the whole notion of being judged.

The single ubiquitously American rite of passage must be the driver’s license road test. Pass, 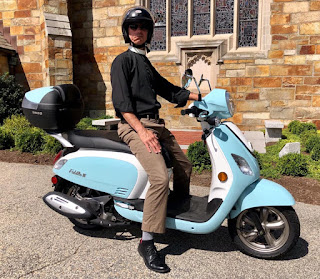 and you receive your ticket to freedom that accompanies your invitation to the open road. Fail, and you suffer the shame and indignity of having to once again be subjected to the diabolical whims of the Registry of Motor Vehicles.

No matter how many years have passed, everybody remembers their driver’s test. Some recall the euphoria of miraculously nailing the dreaded parallel parking portion of the exam. For others, the tester’s disappointed face is forever seared into their memory, and they can still viscerally feel the bump of the curb that signaled failure.

But mostly, it’s the memory of profound anxiety in the moments leading up to getting into the car with the evaluator. There are few times in life when you are so intimately and irrevocably judged by another human being. Sure, there are tests in school and performance evaluations at work. But toss in the requisite insecurity of your average 16-year-old, add the discomfort of a stranger with a clipboard sitting next to you, and the driver’s test is a recipe for existential teenage angst.

I discovered something interesting this past week, however. 16-year-olds don’t have a monopoly on pre-road test nerves. As I found myself at the Registry of Motor Vehicles in Braintree preparing to take my first road test in 35 years, I felt a certain kinship with the nervous teenagers who were waiting their turn to demonstrate their driving skills. You see my learner’s permit for my scooter, a 50th birthday present from my brother, was about to expire after two years. Which meant I had to take the motorcycle road test.

Now, let’s be honest. A baby blue Vespa is not exactly a Harley. I may privately refer to it as my “hog” (which invariably elicits a deep eye roll from my wife), but the local chapter of Hell’s Angels hasn’t exactly come calling. But still, it’s powerful enough to require a motorcycle license in the state of Massachusetts. Which is why I found myself in a parking lot standing in front of a no-nonsense woman holding a clipboard, as I channeled my inner 16-year-old anxiety.

I was secretly hoping that simply making it from Hingham to Braintree without getting flattened by a Chevy Suburban would count as the test. But suddenly I was doing figure eights and using exaggerated hand signals as if I was flagging down a cab during rush hour in Times Square.

Fortunately I stopped myself from hopping off my scooter in the middle of the test and indignantly screaming at the tester “Judge not, lest ye be judged!” And I think this heroic self-restraint contributed to my passing grade.

In this season of anxiety that is life in the midst of a global pandemic, my trip down the memory lane of anxiety felt like a small thing. It’s nothing compared with the amount of uncertainty and genuine fear floating around these days. All we can do is take each day as it comes and recognize that whatever we’re dealing with today, is enough. Tomorrow is another day.

I admit it’s a little strange to think I’m now qualified, at least on paper, to tool around town like Peter Fonda in Easy Rider. But for now I think I’ll stick to taking my scooter to the local coffee shop. That is enough for today.