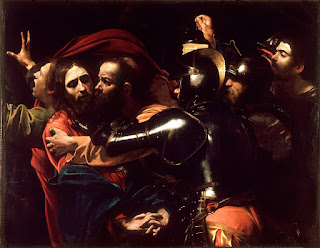 On this Spy Wednesday, so-called because we hear the story of Judas' betrayal of Jesus on theWednesday of Holy Week, I thought I'd share a brief reflection. It's based on the gospel reading appointed for the day (John 13:21-32).

The Wheels are in Motion

Jesus will be betrayed and given into the hands of sinners. The sham trial will follow its course. Pilate will wash his hands. An innocent man will be strung up on a cross to endure a painful death. Peter will deny Jesus three times. The disciples will flee in fear. The wheels are in motion and nothing can stop what’s barreling down the track to an ignominious end. It will soon be finished.

Jesus dips the bread into the cup and gives it to the one who would betray him — a sort of anti-communion. And Judas leaves to do what he was going to do. To sell Jesus out. To be rewarded for his betrayal. As John writes in his starkly poetic way, “After receiving the piece of bread, Judas immediately went out. And it was night.”

How is this even possible? Because God’s plan is at work. Not the plan of the Roman authorities or the plan of the brow-beaten and terrified disciples; not the world’s plan or Satan’s plan. God’s plan is at work. And while the unfolding plan of salvation is a mystery to mere mortals, certainly a mystery to us, God’s unfolding plan of salvation is what’s set in motion. The wheels of life rather than the wheels of death are in motion.

And for this reason, even in the midst of impending death, hope is offered on this day. Remember when Jesus told his mother at the wedding of Cana, at the very beginning of John’s Gospel, that his hour had not come? Jesus’ hour has come. And while Judas plays a particular role in the unfolding drama, the working out of God’s plan of salvation for the whole world is so much greater than 30 pieces of silver. In the end, Judas is a bit player. For the very wheels of salvation are in motion.

Image: The Taking of Christ by Caravaggio (1602)