In Good Faith: Swinging for the Fences

In my January In Good Faith column, I write about my lack of golfing skills and why it's okay to give something up as a New Year's resolution.

Swinging for the Fences

Before I accepted the call to serve as the next rector of Bethesda-by-the-Sea, I felt I needed to 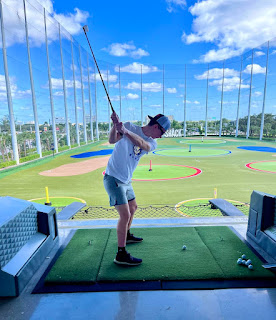 fully disclose an important item about my life to the search committee. It’s always better to come clean before the fact rather than after it, and if I ended up in Palm Beach, I wanted to be certain that this new relationship was built upon honesty not deception.

So, when the interviews and tour were over, I took a deep breath and told the committee chair that I do not, in fact play golf. I told him this while standing outside the church on Via Bethesda, as I heard golf balls being whacked at the Breakers course right next door.

Of course I was joking. Mostly. Not about not being a golfer — I’m not one — but about the perceived requirement for clergy on Palm Beach to have a four handicap. I was knowingly feeding into every stereotype about island life. That clergy work for a couple hours on Sunday morning and spend the rest of the week golfing and schmoozing. But perhaps a small part of me just wanted to make sure. Because the real work of ministry, and why I accepted the call to Bethesda, is to create a place of love and welcome for all people, to encourage each one of us to live out our faith in tangible ways, to cultivate generous hearts, and to make God known both in Palm Beach and the wider world.

A couple weeks ago my 23-year-old son who was visiting from Boston, convinced me to join him at a local driving range. You’ve seen it — it’s the one near the airport with the giant netting. Ben likes to hit balls and play a round every once in a while, something he was decidedly not doing back home where it was 5 degrees out.

Now in fairness to my golfing ability, I am a veteran of mini-golf. When our boys were younger there were plenty of outings to courses where I would always be stymied by the towering windmill. This doesn’t actually transfer to a driving range, where the point is to drive the ball, not putt it. So my lack of skills were on display for all the world to see. Or at least that section of the world that was at a driving range in West Palm Beach at 11:30 am on a Monday morning. The real issue, as Ben accurately pointed out, is that I swing a golf club like a baseball bat. Suffice it to say, that it was a long two hours. Blasted two-hour minimum!

In ministry I’m always pushing people to get out of their comfort zones and try something new. Whether that’s a prayer practice, a way of looking at the world, or a committee they never before considered joining, we grow when we challenge ourselves. But just because something challenges us doesn’t mean it’s worthy of our pursuit. I’m not a golfer and will never become one — I tried it and I’m just not interested. In the same way, it’s important to recognize the things that are life-giving and joy-inducing in our lives and the things that aren’t.

I’m not big on New Year’s resolutions, but giving something up is as worthy a resolution as anything. Think about what truly feeds your soul and consider letting go of something that does not. Even if it’s something you feel you should be doing because everyone else seems to be. Like golf.