In this month's In Good Faith column, I write about living in the present and the perils of being a scrub.

Garbage time. In basketball, that’s what they call the last few minutes of a blowout. The time 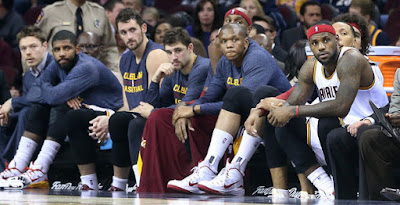 when the outcome of the contest has already been decided, and the two teams are literally just running out the clock before they head to the showers. Since no coach wants to risk an injury to a star player during the last few meaningless minutes, garbage time is ruled by subs and rookies It’s a time for third-stringers to shine, a chance to make a positive impression on coaches and dazzle fans with their hidden prowess. Alas, there’s a reason most of these players haven’t cracked the starting lineup: they’re just not that good.

There are times in our own lives when it feels like we’re just running out the clock; times when we spend more time anticipating future events rather than living in the present. Waiting for our toddlers to get out of diapers, waiting to receive a coveted promotion, waiting to finally become empty nesters. If we’re not careful, we can spend a significant portion of our lives in a self-imposed garbage time. And that’s a sad and joyless state in which to exist.

So how do you break out of this? How do you find joy in the present even as you anticipate that which is to come? Well, if I had an easy answer, I would have already written a bestselling self-help book. But from my own Christian tradition, I find that a few moments each day of intentional, contemplative silence is helpful. It helps keep life in perspective and makes you mindful of the small joys that permeate our seemingly mundane daily lives. Silence forces you to step off the metaphorical treadmill, walk away from your electronic devices, and reflect upon the often taken for granted blessings of your life.

Sure, silence can be both elusive and scary. It’s difficult to carve out moments of quiet in our fast-paced existences, and silence forces us to confront things about ourselves we might prefer to drown out. Yet it also brings balance to our souls and delight in the small, unheralded triumphs of our lives.

In the church year we often talk about “Ordinary Time.” There are actually two such seasons, one that lasts anywhere from four to nine weeks starting on January 6, the Feast of the Epiphany, and one that begins after Pentecost (usually in May or June) and lasts up to 28 weeks.

These seasons are not “ordinary” in the sense of being boring or useless. Rather they are so named because they reflect the fact that, liturgically speaking, they are not dedicated to a particular season or observance.

Some people might see these long periods as the church’s garbage time. There’s nothing flashy about them. There’s no festive Christmas Eve midnight mass or stark service of Good Friday during Ordinary Time. You won’t encounter colorful vestments or over-the-top processions. And yet, when it comes to faith, there’s no such thing as garbage time. All time is holy and sanctified and blessed; no time is meaningless or insignificant or unworthy of praise. Indeed, the most surprising moments of our lives often occur when we least expect them.

It’s been said that basketball would be much more compelling if they just awarded 100 points to each team and started the game with two minutes left. I’m not sure about that. But I encourage you to be aware of areas of your life you may be treating as garbage time — and commit to changing up your approach. The game of life is too short to waste.