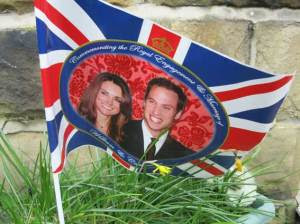 In my latest "In Good Faith" column for the Hingham Journal I share a story of my own brush with royalty. No, I don't mean Elvis, Don King, or one of the Kennedys. I'm talking the real deal here.

Unless you were holed up with Osama Bin Laden, you may have heard that there was a wedding last week across the pond. I can’t say that I cared much about the Royal Wedding and I certainly wasn’t going to get up at 4:00 am to watch it. My wife, on the other hand, spent Friday morning at a friend’s house attending a Royal Wedding party. A dozen ladies, dressed as if they were sitting in Westminster Abbey, gathered to sip champagne, toast the couple, and comment on the proceedings. Kate’s dress got rave reviews; Fergie’s children didn’t come out smelling like an English rose garden. I saw the party pictures that got posted on Facebook and let’s just say that hats and gloves, among other accoutrements, were involved.

Oddly enough, a few weeks before the wedding I found a commemorative mug from Charles and Diana’s 1981 wedding in a cabinet in my office. Seriously. So my one nod to the whole affair was to drink coffee out of it on William and Kate’s big day.

The wedding reminded me that I once had my own brush with royalty. When I was in high school my family took a trip to London. We hit all the usual tourist hotspots: the Tower of London, Big Ben, St. Paul’s Cathedral. Then we loaded onto the top of one of those red double-decker buses and toured the city. From that vantage point we had a stunning view of the Thames River as well as some amazingly colorful and unique punk hairstyles – it was the ‘80’s after all. My brother and I even spotted Billy Joel walking in Trafalgar Square and got him to wave to the whole bus.

But that’s not the kind of royalty I’m talking about. No, I’m talking about the real deal. Because towards the end of the day, we ended up in the famous Tate Gallery to see a special Franz Hals exhibit. At some point I wandered off by myself to stare at one of his more magnificent portraits and when I turned around I came face-to-face with…the Queen Mum.

I’m not much of a royal watcher but even I couldn’t miss this one. There she was, in all her glory, wearing a bright purple dress with matching bright purple shoes and a bright purple handbag. She was short but dignified and quite, well, old. She was at least 90-something at that point – she lived to be 101. But she made a striking impression. And there she was, close enough that I could have literally reached out and touched her. But something held me back – probably the large bodyguard who had his hand inside his sport jacket ready to blow anyone away who even looked at her funny. I smiled slightly and scurried off to find the rest of my family so we could all gawk at a safe distance.

While keeping tabs on the British monarchy may be good fun, from a Christian perspective there is, of course, only one King. And so when we reflect upon Christ the King, our earthly notions of kingship must be suspended. Because Jesus isn’t about the trappings of earthly monarchs – he was born in a stable, not a palace; he had a rag-tag group of nomadic followers, not a royal court; he had “nowhere to lay his head,” not a royal bed chamber. Mary isn’t the Queen Mum, Jesus isn’t part of a high profile and dysfunctional family, and the gospels of Matthew, Mark, Luke, and John aren’t comparable to the National Enquirer, The Star, and the Daily Mirror. It’s a different kind of kingship and a different kind of kingdom. And yet, as the son of God, Jesus is the only king in the history of kingship who could authentically lay claim to Divine Right.

So while I didn’t watch the wedding itself, my administrative assistant did make me at least watch a few snippets on YouTube. It was nice to see the great pageantry of Anglican liturgy and, while I couldn’t have cared less about what the bride was wearing, the Archbishop of Canterbury looked positively resplendent.
Posted by Tim Schenck at 11:05 AM

Wow. The one member of the Firm I definitely would have wanted to meet, had I the chance like you.

Then again, meeting Prince Harry could be interesting, red hair and all (those of us with ginger hair all members of an informal support group). But, I don't think I could keep up with him at a party.

Always worth reading your posts to the very last line!

I had a GREAT Royal Wedding party myself - Buck's Fizz, Champagne, Pimm's Cup, pasties, scones, wedding cake - the whole shooting match. And combined with our recent clergy conference, it all leads me to one conclusion: chasubles should have a train! Maybe I'll make an affinity group...