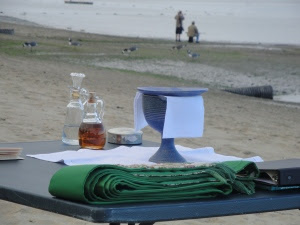 While last weekend may have marked a certain 10-year anniversary, this coming Sunday marks the one-year anniversary of  another momentous occasion. On September 18th, 2010, "Goose Gate" took place at the Hingham Bathing Beach.

You may recall the media frenzy that descended upon Hingham, Massachusetts, when hunters killed a goose just after I led a "Preach at the Beach" family service. It started off with a front page story above the fold in the Patriot Ledger. Then all the local Boston TV affiliates did pieces on it. Finally it hit the AP wire and circled the globe. It was often cited in the "Weird News" sections of online newspapers which means that, to this day, if you Google "weird" and "Episcopal Church" yours truly shows up.

A lot has been planned to mark the anniversary. Churches throughout the land will be ringing bells at precisely 5:27 pm to remember the goose that laid down his life for no apparent reason. Children in pre-schools from Hingham to San Diego will be playing Duck, Duck, Goose in solidarity with the traumatized kids who attended the service. Goose hunters will blow their goose calls behind their respective blinds to offer a raspberry to one of their comrades who clearly needs target practice. CNN will air a retrospective titled "America Remembers: Goose Gate 2010" and Fox News is profiling me in a story they're calling "The Goose Hugging Liberal: One Year Later." (Yes, I was actually called that on talk radio).

My takeaway from the whole affair was that online anonymous comments do nothing to raise the public debate on any issue. And grammar is a lost art. Perhaps along with Field & Stream, "Eats, Shoots, and Leaves" should be required reading of anyone seeking a hunting license. If you need a refresher you can read a sampling of these comments here and here (warning: they're not for the faint of heart). My favorite was being likened to David Koresh.

As I always maintained, my beef wasn't against hunters or even hunting itself. It was with hunting at the Hingham Bathing Beach. Kids, kayakers, cars, sun bathers, and boaters don't mix with fire arms. Period. It's not about "back door gun control," as someone accused me of championing, but common sense.

Here's to a media-free September around these parts!
Posted by Tim Schenck at 6:24 AM

Email ThisBlogThis!Share to TwitterShare to FacebookShare to Pinterest
Labels: Hingham

Are you having PTSD over this? Everyone else has moved on.

our "goose gate" here in Lisbon, NH, was last years stealth killing of the flock of geese that were here all summer, then just disappeared one day. Poisoned? some say yes, others have "no idea" where they went - but the didn't fly south. So far this year, all the geese seem to be alive and well. thanks for your posts!

I think you should have commemorative tshirts!

How ever did I miss this? Was it a Canada goose? Why the bathing beach? Doesn't the Sunday morning AM club still meet at the dump, where the tail gates of the beach wagons are down and martinis are served? EmilyH (previously, way previously, of 403 Main)

Emily, not sure how you missed this -- how often does Hingham hit the AP wire?! Love reflections!