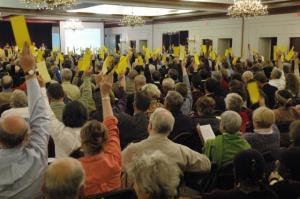 With the arrival of November, the opening gavel for Diocesan Conventions around the country will soon be smacking the dais. My own starts tomorrow in the Diocese of Massachusetts and, as I promised in my ordination vows, I will be "taking my place in the councils of the church." This is important work but no one should attend Convention unprepared. Thus, as a service to delegates everywhere, I'm offering you my Diocesan Convention Survival Guide.

1. Charge your smart phone and/or tablet. i-Phone, BlackBerry, Droid, i-Pad -- whatever you use make sure it's fully charged and ready for action. Apps are God's antidote for clergy who adore the sound of their own voices. Bring your charger and scout out a plug. There's nothing worse than seeing that red battery light in the waning minutes of convention business. And by "waning minutes" I mean the last three hours.

2. Find an aisle seat near the back of the venue. Easy egress and ingress is key, especially during budget presentations given by assistant diocesan treasurers wielding the ubiquitous monotone. Frequent "bathroom" breaks are allowed. You can't help it if you have a small bladder.

3. If you're going to make snide comments, share them via social media. Don't hide your lamp under a lamp stand! Chances are if you're thinking it, so are the other 400 people sitting in uncomfortable pews (or comfy seats if it's held at a hotel).

4. Import your own coffee. This is essential since all "coffee" brewed at Convention sites is by its very nature nothing more than brown water. Bring a thermos of good coffee from home to get you through the registration process and opening remarks. Google local coffee shops in the immediate vicinity and even if you have to run out for a "pastoral emergency" to get a refill several times per day, it's worth it. Didn't Jesus say, "Delegate cannot live by Convention coffee alone?" I think that's in Mark. 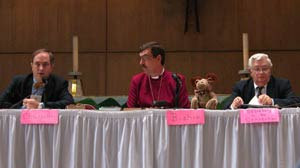 5. Do not even think about approaching a microphone. Nothing good has ever come from speaking at Convention. Prolonging the debate of an issue that will unanimously pass anyway will likely only increase your time in purgatory. Are you really willing to take that chance?

6. Don't be one of those six people. There are six people in every diocese (almost always clergy) for whom Convention is not complete unless they pontificate at least once on fill-in-the-blank issue. You know who they are and you can even write their six names down and check them off as they approach the microphone to speak. The only positive is that you can bet with your fellow delegates on the actual order and turn it into a Ponzi scheme. This will help your annual stewardship campaign back in the parish.

7. Choose your lay delegates wisely. I have two criteria for delegates to Convention: a) they must be at least vaguely interested in the work of the diocese and b) I have to like them enough to be willing to spend an entire day or two with them. They also have to appreciate/not be bothered by my sotto voce comments criticizing the various Convention liturgies.

8. Smart phones are the new knitting. If you have a problem with me updating my Facebook status during Convention business then I think your niece will hate that ugly scarf you're knitting. Perhaps we can all agree that knitting and surfing are two sides of the same coin. I can't knit but I can relate to wanting to leave with something tangible and positive at the end of the day. 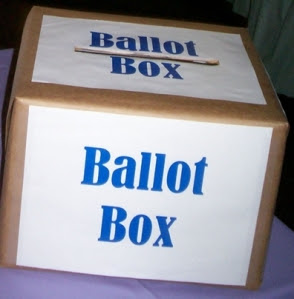 10. Receive Communion from the Bishop during the Convention Eucharist. We know that Jesus is fully present in the Eucharist no matter who doles it out. However you may as well make sure the bishop knows that you love Convention and wouldn't miss it for the world. If you're new to the diocese, wear a giant name tag and make major eye contact. If you trip on your way up to Communion and cause a big scene, this is a great way to insure everyone knows you were there (even minor canons and such).

That's it for now. I'm sure I'll add others in the next couple of days and if you have any to add to this list, I know that Convention delegates throughout the world will be eternally grateful (especially if you translate them into their respective languages).
Posted by Tim Schenck at 6:34 AM

Awesome. (From a convention manager in province V.)

Do what I did. Retire.

Now I never have to attend another clergy conference, "Reflection Day" or diocesan convention.

And the Church Pension Fund even pays me every month for not attending those events!

Your mistake in number 11 is assuming that all who run want to be elected. :D

#9's my favorite! However you don't have a monopoly on box lunches. We Reform Jews will consume a fair number of them at our upcoming Biennial Convention in December...some tuna, some turkey, some veggie, but definitely none with ham!

Knitting and facebooking aren't mutually exclusive. Trust me. (I'll prove it by juggling pointy sticks and breakable electronics to the stress and delight of those sitting around me at our convention next week!)

Hide a magazine in the convention binder. That way, as you peruse Sports Illustrated, you will look as if you are pondering deeply the convention resolutions or treasurer's report.

The Sports Illustrated better not be the annual Swimsuit Issue!

I especially agree about NOT approaching the microphone: "all good deeds WILL be punished." I also like the request that God occasionally be remembered: God is so often not allowed to be present or speak as God lacks delegate status and may not have canonical residence in that diocese. But, our Council is usually great...and blessings-filled.

I attended my first convention and I wish I had read this beforehand.