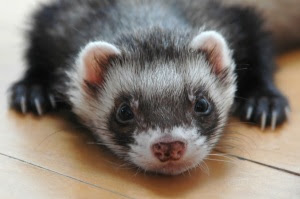 In my latest monthly "In Good Faith" column I examine the impact (which resembles an explosion) of ferret adoption on domestic chaos. Yes, I've had ferrets on my mind lately, even bringing them into the realm of stewardship. But I'm done talking about them for awhile. At least until I get Caspar potty trained!

Sometimes domestic chaos just happens – the kids eat their entire Halloween stash in one sitting, your wife breaks a wrist (or two) while ice skating, or your mother-in-law moves in for nine months while her house is being renovated. And sometimes you bring it on yourself. That’s the way it happened in our home last month as we adopted two ferrets.

Why ferrets as opposed to, say, guinea pigs, hamsters, gerbils, turtles, or a pet rock? Or another dog for that matter? Good question. Obviously the boys were involved in this since owning a ferret was never a childhood fantasy of mine. If asked to identify a ferret in a police line-up along with some similar suspects – weasel, rat, wombat-- I doubt I would correctly finger the ferret.

Luckily, I have someone to blame for introducing the boys to these carnivorous mammals (they’re not rodents – who knew?). My wife Bryna’s friend and co-worker Jen has two ferrets named Mahi and Fenway. Bryna and the boys spent a day with her in Southie and their take-a-way was “ferrets are wicked cool!” followed by “when are we getting ferrets?” Thanks, Jen. They even came up with names on the ride home: Caspar for a boy and Mimi for a girl. I have no idea where they came up with these but they roundly rejected my suggestion of “Ferret Beuller.”

The incessant lobbying had begun in earnest. Mahi and Fenway were given an invitation to our annual early-October Blessing of the Animals held on the front lawn of the church. Amid the many dogs, a few brave cats, a sheep, two one-week-old baby chicks, a rabbit, and four frogs, the ferrets did just fine and were fortunately not eaten by any other animal, which would have put a damper on the proceedings. They were even joined by a third ferret named Sneaky Pete. Bryna’s ulterior motive was to get them to meet Delilah and see how a dog would react to ferrets. Just fine as it turned out, much to our chagrin.

The next thing I knew the boys were spending inordinate amounts of time on ferret adoption websites. It didn’t help when Jen gave them the most recent issue of Ferrets Illustrated (or whatever it’s called) along with a book on all things ferret. Now they were getting educated, Bryna was being sucked in, and the next thing I knew she and the boys had ordered a gargantuan ferret cage online. Do you have any idea how ridiculous it feels to have a ferret skyscraper being delivered to your home in three to five days with no ferrets in sight?

Fortunately, I guess, since I was now resigned to my ferretorious fate, Bryna made contact with a woman in Rhode Island who had two ferrets – a one-year-old female and a two-year-old male – for whom she was seeking a good home. Between work and a new baby she and her husband just couldn’t give their ferrets the attention they both crave and deserve. So the whole family, including Delilah, piled into the minivan for the hour-long drive to meet them. The boys and the ferrets took to one another instantly, Delilah sniffed them if not approvingly then at least non-threateningly, and we left with two ferrets and a bunch of supplies and toys.

I have to admit they are incredibly adorable – lively, curious, engaging, mischievous – and they bring out the best in the boys – sensitivity, responsibility, and affection. They also sleep for about 20 hours a day, which is a plus.

Life often offers unexpected twists and turns. We can embrace them as signs of God’s presence and vitality or fight them as inconveniences that aren’t part of our plan. I like to think that domestic chaos is a divinely-inspired, multi-splendored thing and that two new ferrets simply add to the blessed mixture.