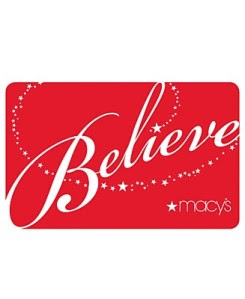 "Believe." That's Macy's one-word advertising campaign this holiday season. You've likely seen it plastered on buses and screaming across the top of full page newspaper ads. I've found it jarring because it feels either like a subliminal Cold War-era message or an emasculation of the word itself.

Yes, I know that Macy's has a whole charitable giving program based on the campaign that benefits the Make-a-Wish Foundation. And that's a good thing even if it's an add-on to deflect any potential criticism from, ahem, the blogging public.

The whole notion of what to believe is left intentionally ambiguous. This month, the choices are wide open: Santa, Christ, general hearth and home goodness, the Christmas-Industrial Complex, yourself, that your credit card debt will magically disappear. It's a clever ad campaign meant to encourage good feelings and prime the economic pump.

But as a Christian who celebrates the coming of the Christ child  this month (yes, some of us still do) it grates. Maybe it's because Christmas is not about belief in general but belief in particular.

The word itself derives from the Latin credo -- from whence we derive the word creed. On Christmas Eve those who make it to church will recite the Nicene Creed, the primary Christian statement of faith. It begins "I believe in one God" or Credo in unum Deum in Latin. And we'll go on to proclaim our belief in the Incarnation of Jesus by saying, "For us and our salvation he came down from heaven: by the power of the Holy Spirit he became incarnate of the Virgin Mary, and was made man."

So, thank you Macy's for encouraging us to "believe." But we'll take it from here.
Posted by Tim Schenck at 10:52 AM

Yes, I've had similar thoughts about the Macy's motto - "branding" attempt - slogan. I guess I found the terms "believe" and "shopping" to be wholly different things. When I think about what I believe, it doesn't have much to do with shoe styles. If I think about it from the store's advertising point of view, "believe" is extremely powerful. Step into the world of Macy's - the glittering store, the wonderful, venerable parade - and you'll "believe" that everything will be all right. But really, it's just a store. I bought a coat there recently and I'm happy with my purchase, but it didn't change my view of the world. I watch the parade just about every Thanksgiving and enjoy it immensely, but it's not something that causes me to think deeply about existence.

Maybe it's all about perspective. I especially like your last paragraph, Tim.

Thanks for this, Solange. So sometimes a coat is just a coat?