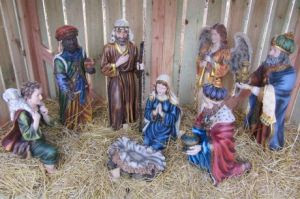 A few years ago, stealing the baby Jesus from outdoor nativity scenes was all the rage. While I'd personally rather have a six-foot tall Balthazar in my living room, most thieves presumably felt that swiping the Christ child was both more poignant and sacrilegious. I'm not sure what you do with a giant plastic baby wrapped in swaddling clothes but I do hope, for propriety's sake, that he's not living in the basement of a fraternity house next to the beer pong table.

In recent years some churches and towns have combated this crime by jabbing GPS tracking devices into their babies Jesi (that's the plural of Jesus, right?). My take is that if someone needs Jesus in their life that badly, they may as well just keep him. But, then again, I don't put up a giant nativity scene so I've never been a victim of a Jesus-napping.

When I was a seminarian I did my field education work at Trinity Church in Highland Park, Illinois. I had a great experience sitting at the feet of the then-rector Terry White. I did all sorts of things during that time including leading adult education classes, going on pastoral visits, putting together a foosball table, having lunch with the rector, and preaching on occasion.

During Advent that year (1999) someone stole baby Jesus out of the creche set up in Daley Plaza in downtown Chicago. This was shocking because it was the first time anyone had pulled off a Christmas caper on such a grand scale. And the media loved the story! It was all over the news with sensationalized headlines.

I remember preaching the next weekend and happened to toss in the term "Christ Heist." I'm sure there were profoundly insightful theological references in the sermon but all anyone could talk about was that phrase. Terry never forgot the line and it's become something of joke between us each Advent. 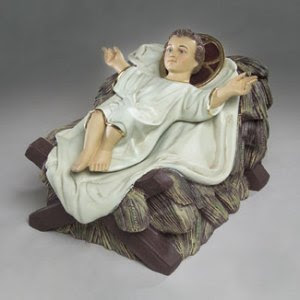 With this as the subtext, Bishop White tipped me off yesterday that a baby Jesus was stolen in Des Plaines, Illinois, last week. (Yes, Terry went from Highland Park to become Dean of the Cathedral in Kansas City before being elected Bishop of Kentucky -- it pays off to stick near me if you want to be on the ecclesiastical fast-track).


According to an article on the Des Plaines Patch website, police were dispatched to St. Martin’s Episcopal Church on December 21st at 10:20 a.m. An unknown offender had taken the baby Jesus from the nativity scene on the front lawn of the church sometime between December 20th at 10 pm and December 21st at 8 am. The Jesus was made out of plaster and had a light blue blanket on it.

So another Christ Heist has taken place in Illinois. I hope you have an alibi but more importantly, if you see the baby Jesus this Christmas season, please return him to Des Plaines.

If I were being snotty I could say this is what they get for putting Jesus into the creche before Christmas Eve. Fortunately I'm still in the Christmas spirit so I'll keep quiet. At least until Epiphany.
Posted by Tim Schenck at 10:09 AM

Yes, when it comes to nativity sets, Jesi is the correct usage for multiple baby Jesus figures. Because I have several nativities, we have a specially designated Baby Jesi Drawer in the living room where the assorted Baby Jesi wait until Christmas morning.

Years ago, the baby Jesus at the parish where I worked was so badly dinged that it really had to be retired, but we never quite got around to it. Two days before Christmas I had the extreme pleasure of hearing our priest mutter, "Where the hell are we supposed to find a baby Jesus at this late date?"

The baby was stolen on December 21? My guess is that this disappearance is God's wrath because they conflated Advent and Christmas.

It's not that hard. Jesus shows up on December 25. The camels and magi come on January 6. Put them out before that, and you're begging to become a newspaper headline.