Rescuing Christmas from the Mall 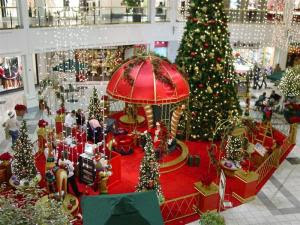 In my latest "In Good Faith" column I take on mall Santas and encourage people to forget about the true spirit of Christmas.


Rescuing Christmas from the Mall

I have nothing against mall Santas. Out of uniform, they’re some of the jolliest people I know. So why can’t I stand going to the mall at Christmastime? It may be the endless soundtrack of Christmas carols, the tinseled decorations on steroids, or the forced joy that pervades each level. Obviously the hyper-consumerism is a turn-off but I think ultimately it’s just the lack of anything having to do with faith: God is nowhere to be found. And “Jesus is the Reason for the Season” bumper stickers in the parking lot aren’t helpful.

The sad reality is that I loved shopping on Christmas Eve. There was a certain adrenaline-pumping desperation to the whole affair and the place was full of like-minded procrastinators. This fraternity (yes, it was mostly men) were men (did I mention it was mostly men?) on a mission. There’s nothing like a deadline to focus your gift-buying intentions. As the clock ticked toward closing time a new mind-set always emerged – a cloudy vision about what the people in my life truly craved. “I’m sure Mom has always wanted a gift pack of stale coffee from Gloria Jean’s” and “I know my brother will just love this two-in-one fountain pen/compass set from The Sharper Image. Isn’t he always finding himself lost in the woods and needing to take dictation?”

Even though I no longer shop on Christmas Eve, there is a better way to enjoy this season of preparation than to engage in mall-induced competitive shopping. Rather than bemoan the fact that the American Christmas experience has precious little to do with the Savior’s birth, I offer you several suggestions to undermine the mall Christmas virus. And I won’t even suggest that you get your shopping done throughout the year; unless you’re like my wife Bryna, it’s impossible.


I should admit to a recurring mall fantasy. I’d like to go to a large suburban mall and find the back room that contains the sound system. Then I’d take it over for an hour or two. I’d replace “Walking in a winter wonderland” with “Come thou long expected Jesus” and I’d substitute “Frosty the Snowman” with “O come, O come Emmanuel.” Then I’d just stroll around poking into The Gap and Starbucks to see people’s expressions. Maybe it wouldn’t affect anyone but maybe it would change the focus, if only for a moment. Maybe people would recognize the true gift of the season: God’s love for us in sending his only son to live and walk among us.

Here’s hoping that this December you will be overextended in praise and thanksgiving rather than credit card debt.
Posted by Tim Schenck at 10:23 AM

When you hijack the sound system, don't forget the very beautiful and so appropos, "What is the crying at Jordan? Who hears, O God, the prophecy? Dark the season, dark our hearts, and shut to mystery" Hymnal 69 I think. Ooh...