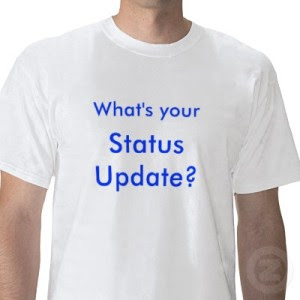 One of the great things about blogging is what I like to call "channeling the crank." Actually I've never used or even thought  this expression before but whatever. I like it so I'm sticking with it. What I mean by this is that whenever I feel cranky, which does happen on occasion, I can channel the crank rather than taking it out on those around me.

In today's version of keeping those around me safe from crankiness, I thought I would direct my energy toward annoying Facebook statuses. Below are a few general categories of those that annoy me. Granted, I've probably been guilty of using some of these over the years. And I have no illusion that others aren't annoyed by some things I post: "If I see one more status update where he uses his annoying 'religious' jargon, I swear I'll un-friend him."

So with that as the context, here goes:

1. Anything having to do with the food that you are either eating or preparing. Unless you are dining on foie gras with the King of France, I'm not interested.

2. The weather. Is it flurrying? That's great but please keep it to yourself. If I'm really interested in the weather where you are (and chances are I'm not) I will consult the Weather Channel.

3. Quotes from fill-in-the-blank inspirational leader. If I want to be inspired by MLK, JFK, or anyone else whose last initial begins with the letter K, I will read a book by or about them. Having you quote them is somehow less inspiring than going directly to the source.

4. Anything posted by bishops. Since the ability for public snark was extracted at ordination to the episcopate, all posts are non-offensive and "safe." I'm delighted you had a wonderful visit with the good people of St. Elsewhere -- save it for an article in the diocesan newspaper (oh, that's right, it was eliminated due to budget cuts).

5. Videos of songs and/or hymns. I'm glad you love the Kings College, Cambridge, version of "Once in Royal David's City."  So do 25 of my closest friends. Plus, I have the CD. The basic rule of thumb should be that if you are a professional musician and you played the music yourself, post away. Otherwise go listen to your i-Pod.

6. Pictures of your children. Oh, don't get me wrong, I love posting pictures of my kids and seeing pictures of your kids. It's one reason why we don't have to send out so many Christmas cards these days (plus stamps are going up to .45 cents). But, really, once a day will suffice.

8. Status updates longer than two or three sentences. A status update is not a novella. If you have that much to say all at once, start a blog. Or become a preacher.

9. Posting more than four times a day. I realize you have a lot to say, are endlessly fascinating, and believe everyone is hanging on your every word and action. That may well be true. But there's an outlet for this. It's called Twitter.

I realize this leaves little left over to write about on Facebook. And I'll probably lose a friend or two. I guess I could write a blog post about what types of status updates really float my yacht. But that wouldn't be nearly as fun. Nor would it do much to channel the crank.
Posted by Tim Schenck at 3:45 PM

Email ThisBlogThis!Share to TwitterShare to FacebookShare to Pinterest
Labels: Technology

France has a KING? When did that happen?

A few centuries ago.

Hey Tim, I'm having a sandwich for lunch. Not sure what kind of bread yet, but I'll let you know. That reminds, my I should post a video of "One bread, one body" on your wall. Could be doing something more useful, but it's a gray day and at 22 degrees outside, I just don't feel like it. Maybe it's national Choose a Sandwich Bread Day.

Posting more than four times a day? Look, I haven't counted or anything, but Father Snark here has surely posted that many times while at diocesan conventions, clergy conferences, inter-faith worship services, etc.

Come over to Twitter. We're faster and funnier over there. As for the food tweets, at least they're only 140 characters!