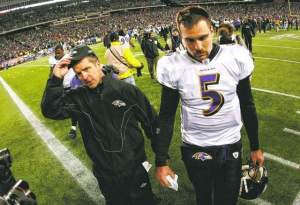 Here's an article I wrote for the Baltimore Sun if only to prove that it is possible to write about faith and football without once mentioning Tim Tebow. It's on the Sun's website now and will supposedly appear in tomorrow's print edition on the Editorial Page. Oh, and the other reason I wrote it was so my mother could brag to all her friends in Baltimore.

It's not 'only a game' Ravens' fortunes bind a diverse community with a single, consuming passion

HINGHAM, Mass.-I'm in mourning. Not the kind that involves grief counseling or a call to the local funeral home. I'm mourning the loss of my football team, the Baltimore Ravens, in gut-wrenching fashion to the New England Patriots in the AFC Championship Game.

Of course, I'mnot getting any sympathy around here, living as I do in the heart of Pats country. My day-after-the-game visit to Pete's Barber Shop was an exercise in torture, decked out as it is in Patriots memorabilia. And while I have yet to meet fellow Hingham resident Coach Bill Belichick, I have a hard time believing he'd offer me his hoodie-adorned shoulder to cry on.

There's a terrific sports program called "Only a Game" that airs Saturday mornings on public radio in Boston and Baltimore. It's basically a sports show for the highbrow fan -  you won't find anyone identifying himself as "Lou from Lowell" calling in to suggest the Red Sox trade John Lackey to the Yankees for Derek Jeter. The stories are told from interesting angles and are well-researched, written, and delivered by host Bill Littlefield.

My only problem with the show is the name, because to die-hard sports fans, it's much more than "only a game." Such a title implies an observer's detachment, not a fan's passion.

Yes, every sports fan, when pushed (even ones who have season tickets and wear face paint) will admit that ultimately it is  just a game. Perspective is important, and whatever the sport, whatever the stakes, it's never life and death.

Nonetheless, in the midst of profound grief over a heart-wrenching loss by your favorite team, the perspective doesn't matter. It's not a question of the mind but of the heart - because even though I know the Ravens' loss is hardly the end of the world as I know it, the loss stings.

Days later, I'm still nursing profound disappointment when I think about the game, though the immediacy of that raw, slugged-in-the-gut feeling has dissipated. Yes, even a seemingly mature, thoughtful, emotionally healthy and spiritually plugged-in person can experience profound sports-related grief. I skipped over the denial phase after watching Lee Evans seemingly catch the winning touchdown pass from Joe Flacco and then seeing kicker Billy Cundiff miss a potentially game-tying 32-yard chip shot. I went straight from disbelief to anger to depression, which was only reinforced by the stark photographs of the Ravens players cleaning out their lockers the next day. In sports, unlike much of life, there is a black-and-white finality that defies nuanced shades of gray.

The other reason true fans don't treat their sports as "only a game" is that our teams become part of our identity. I'm not sure "Orioles and Ravens fan" will be inscribed on my tombstone, but it will likely make the obituary one day. Such loyalty allows me to tap into my geographical roots (Baltimore), my emotional roots (my childhood) and my spiritual roots (my late father). This is why we care so much about our sports teams - our loyalties transcend the box scores and standings. There's a reason I own a stadium seat from the old Memorial Stadium: It's a holy relic from the past that keeps me connected to a cherished time in my life.

As a person of faith, I realize that my true identity has nothing to do with sports teams or social clubs or denominations or schools attended; it is as a child of God. Yet God has created all of us to be interconnected with one another and to be in relationship with others. One manifestation of this is our human associations and shared passions.

I'll get over this loss (I'm not that pathetic), and so will every fan, coach and player. But that doesn't mean it  won't affect us all in profound ways. This is part of the joy of our humanity: We hurt, we heal, we are transformed. Passion and loyalty for things beyond our personal control don't make us delusional - just human.

The Rev. Tim Schenck, the rector of St. John's Episcopal Church, is a transplanted Baltimorean living in Hingham, Mass., a suburb of Boston. His email is frtim1@gmail.com.
Posted by Tim Schenck at 3:15 PM

Never got the sports fan thing to begin with and so moving to Baltimore has been quite the shock. Glum town these days. I'm trying to feel sympathy since empathy isn't even possible.