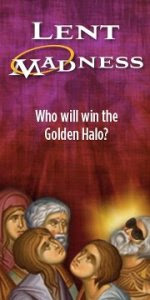 Now that Lent Madness has gone global, bordering on viral (and it's not even Shrove Tuesday), I feel the need to explain why I'm partnering with my archnemesis this year. Scott Gunn has already offered his explanation, which is, naturally, filled with half-truths and slander. Fortunately, no one reads his blog.

What's really happening here as I (hold my nose and) work with Scott is that I'm using him. Don't tell anyone but unlike Scott, I'm not a former IBMer. So I'm using him for his technical expertise and geekery, both of which he has in spades. Oh, and the Forward Movement contact list.

Thus, you'll note that Lent Madness now has its own website www.lentmadness.org. and you can "like" it on its own Facebook fan page. For bloggers and web page administrators you can even download a free Lent Madness widget. (Put it on your site! Don't delay! Lent is coming!). 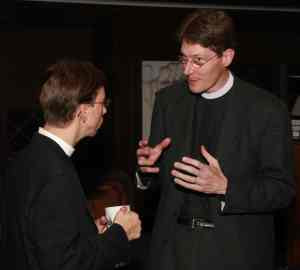 Unlike the last two years I won't be hosting Lent Madness here on my blog but rather over at the new site. And I've enlisted eight "celebrity" bloggers to do much of the writing. It's an amazing group of writers! Check out their bios here.

I'm excited about this new approach and thank (gulp) Scott for joining me in the madness this year. Now in its third year, Lent Madness has a solid history, a growing fan base, and will continue to be an informative, fun Lenten devotion.

Oh, yeah, I almost forgot the new slogan that Scott wouldn't go for (party pooper): We put the 'Damn' in 'Madness!'
Posted by Tim Schenck at 8:12 AM