Magi MythBusters! (and the real reasons they were late) 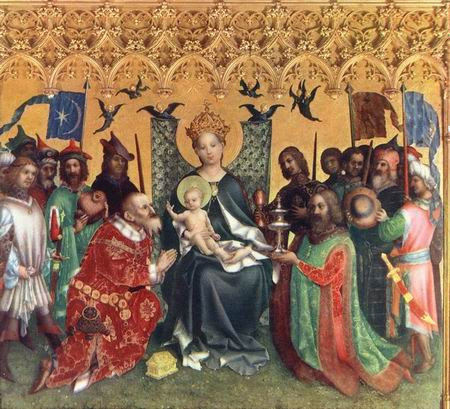 As you probably know, we celebrate the arrival of the Magi to Bethlehem on January 6th, the Feast of the Epiphany. Well, unless your only contact with the Christmas story is an annual Christmas pageant in which case you believe they arrived right after the shepherds on Christmas Eve. Yes, we conflate these stories making every creche, not to mention every Christmas Eve pageant, biblically incorrect (shepherds and kings don't mix -- look it up).

But that's okay -- I'm just glad people are hearing the story even if it's the Cliff's Notes version. Plus, I sure won't be the one to tell the pageant director there won't be any frankincense next year.

While we mark the arrival of the Magi on January 6th, the reality is we don't actually know when they showed up. In fact it may have been years later assuming they didn't start traveling from the East (probably modern day Iran) until the birth itself when the star appeared. Camels aren't exactly built to set land speed records.

Oh, and they weren't really kings either. More like astrologers or scientists who worshipped and sought truth in a variety of ways. They were respected for their wisdom and spiritual insight but it's not like they were "real" kings like, say, Herod.

One thing is clear: they never showed up at the manger as popular legend would have it. Matthew's gospel makes this clear: "And going into the house they [the Magi] saw the child with Mary his mother, and they fell down and worshiped him. Then, opening their treasures, they offered him gifts, gold and frankincense and myrrh" (Matthew 2:11). Going into the house! Which makes sense since surely the Holy Family didn't stay in that stable for too long.

By the time the Magi made it to the party, perhaps Jesus was finally sleeping through the night (let's face it, that first night might have been holy but, as any parent knows, there was surely nothing "silent" about it). Still, the gold, frankincense, and myrrh? Lousy baby gifts by any standard. I'm sure Mary was really hoping for some diapers, a few onesies, and a binky.

A couple of years ago, just for fun, I started wondering about what kept the three kings from making an on-time arrival. I scoured many sources and came up with the following possibilities:


1. Balthazar took forever doing his hair while Caspar and Melchior sat on their camels and stewed.

2. The holiday traffic on the way into Bethlehem was dreadful.

4. The Star of Bethlehem (the original GPS) kept saying "recalculating" and they found themselves in a sketchy part of town.

5. Caspar drank way too much water at the first oasis which meant an extra long stop at the Molly Pitcher rest stop.

7. Due to poor behavior on the part of the other two kings, Melchior had to pull over more than once to yell, "If you don't stop fighting I'm going to turn this caravan right around!"

8. Stopping at the Holiday Inn slowed them down because, in a precursor to today's "culture wars," Balthazar kept insisting the name should be changed to "Christmas Inn."

10. They took a vote and decided to take their sweet time getting to the manger so they would have a day all to themselves on the Church calendar.


I'm not sure you'd find any scriptural warrant for this list. But then again you'd find the same basis for assuming the Magi showed up at the manger.

I wish you all a blessed Epiphany. How great that it coincides with Sunday morning this year!
Posted by Tim Schenck at 8:35 AM

I sort of like the idea that these folks weren't kings at all, but astrologers of the ilk of an ancient National Enquirer variety.

Nothing about men and asking directions???

Camel meat is rather tough so stewing might help and that is a slow process.

Surely hope everyone had a chance to watch the Christmas special of "Call the Midwife" on PBS, speaking of pageants.

Personally, I think whoever first came up with the notion of children enacting the Christmas story was a genius.

The Magi may have been Zoroastrians, do you think?

This is another humorous take on the holidays we just celebrated. Whether Christian or not, anyone with a sense of humor should get a chuckle out of this. http://www.youtube.com/watch?v=ILpZ02tJVL4

Recommended reading: "The Star," a short story by Arthur C. Clarke, made into a Twilight Zone episode. Great poem at the end.

Seriously, I've heard that there were 3 gifts, not three kings, and the symbolism of the gifts is the point of the story. There was gold for kingship, frankincense for deity, and gold for death. The child was a king, who was God, who would die.

Best way to avoid the Wise Men at the Nativity Play - write your own! Trinity's play for the past two years actually explains, in the dialogue, that the Wise Men don't show up until later! Ha!

Q - "What's the difference between an astrologer and an astronomer?'
A - "About 50 IQ points."

You write as if there's anything about the story that is factual. I think we should pay attention to what the story actually says, but it's even more important to keep in mind that it's theology, not history, and should be interpreted as such.