I love baptisms. Baptizing infants (and those who can speak for themselves) is one of my absolute favorite things about ordained ministry. Being the conduit for establishing that indissoluble bond between an individual and Jesus is a privilege.

Plus, when there are babies involved -- which is the norm -- I'm able to get my baby fix. I look at it as grandparent training: holding babies until they do those things that babies do and then handing them back to the parents. Some of my parishioners call me "The Baby Whisperer" and I admit I do have a pretty uncanny ability to quiet down a fussy infant. Also, my preaching puts them right to sleep.

We're fortunate to do a lot of baptisms at St. John's and there's nothing better than welcoming a new parishioner into the "household of God." But we also err on the side of grace and baptize babies of some families we don't know. I always run a mandatory baptismal preparation class for parents (and ideally godparents) in the days or weeks leading up to the big day. I talk about the symbols of baptism and the liturgy and what it all means (fortunately I had the Episcopal Church's baptism guru, the Rev. Dr. Ruth Myers, as my liturgics professor so I take this stuff seriously). I also give them a booklet with some more detailed information about baptism in general and at St. John's in particular. 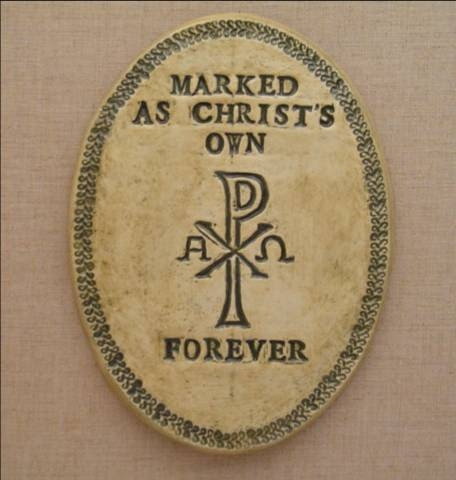 One of the major points I like to stress is that baptism isn't a rite of passage but a rite of commitment. And there's a major distinction between these two! If the baptism becomes merely something to "get through" before the day's major event -- brunch -- then we have a problem. Reading through the baptismal questions demonstrates just how serious this stuff is, a point I'm always tempted to make by showing parents that wonderful carnage-filled baptism scene from The Godfather.

Yesterday on Pentecost -- one of the four days of the church year deemed "especially appropriate" for baptism -- we welcomed thousands of new Christians into the church (uh, not at St. John's -- five this weekend -- but in parishes everywhere). And I'm always reminded that some people still struggle with taking it seriously (not regular parishioners mind you). I think the worst example of Baptismal Parties Behaving Badly was the parish I served in New York where a godparent answered her cell phone during the baptism and then proceeded to narrate the entire baptism for her friend.

So in this light, I have rewritten the baptismal questions from the Prayer Book. There are three renunciations followed by three affirmations. Maybe we'll start reciting these at our baptism prep classes!


Then the Celebrant asks the following questions of the parents and godparents who speak on behalf of the infants and younger children.

Question: Do you renounce flash photography and all annoying actions that rebel against the liturgy?
Answer: I renounce them.

Question: Do you renounce blowing off coffee hour and other actions which corrupt and destroy the concept of community?
Answer: I renounce them.

Question: Do you renounce yapping during the communion anthem and all sinful desires that draw you from the love of the sacrament?
Answer: I renounce them.

Question: Do you turn to the hymnal and actually sing the hymns?
Answer: I do.

Question: Do you put your trust in God by shutting down your cell phone and not surfing the internet during the sermon?
Answer: I do.

Question: Do you promise not to use the Peace as your own personal family photo op?
Answer: I do.

Okay, so I'm having some fun with this. And in that spirit, feel free to share your own stories. As clergy we do ourselves and the church no favors by accepting such behavior and it's our responsibility to nip it in the baptismal font.
Posted by Tim Schenck at 6:55 AM

Do you promise, if you should only return at Xmas and Easter, to stand in the back until the faithful get the best seats first?

Do you renounce hiring a professional photographer who will park himself in the center aisle and take flash photos of the processional, the gospel procession, and the preacher, until the preacher has to stop in the middle of her sermon and request in no uncertain terms that he cease and desist?

Do you renounce waiting in the parking lot for all 50 family members to arrive, gabbing loudly until 5 minutes after the service was supposed to begin, until the priest has to go out and order the entire lot of you inside to your reserved seats so the procession can begin?

Do you renounce referring to the baptism as a "christening" because "baptism" sounds too much like we're all going down to the river or something?

During my son's baptism, he was lifted by the priest into the air – face front – for all congregants to see. He (my son, not the priest) proceeded to fart loudly in the priest's lavalier mic.

We were in a large stone Cathedral with excellent acoustics.

Not sure if this was a theological or simply biological statement of faith.

I can only think of one response to this.

We had 4 yesterday, one a teenager who did not enjoy having her bangs disrupted. I wanted to tell her that this is the first of many disruptions caused by Baptism.

I used to "work both sides of the street" as an organist for both synagogue and church services. I've seen a rabbi literally chase someone out of the sanctuary when he refused to end his cell phone conversation during the Torah reading.

Susan, you need a verger!

You describe my experience yesterday. Lovely people, but they behaved just as your vows predicted!

How about a rubber stamp for the child's forehead as you say, "You are sealed.....," using indelible colorful ink. Tell the alarmed parents it's an "outward and visible sign, etc." And, I did see a woman texting in church not long ago. Wanted to go up to her with a bucket of water and give her a choice of dropping the phone into the bucket or pouring the water on her head in a different form of baptism. Her choice.

We once had the "Baptism from hell" during the Great Vigil a few years ago. Flashes going off in the darkness (until a solidly built usher marched up to them and told them to stop in 2 languages), about as much cleavage and thigh showing on the mom as is normally seen on South Beach. Oh, and the reason they weren't getting the kid "done" at the neighboring RC? They were actually still married to other people. Now I don't believe in shutting the door on the Holy Spirit, but now it's open for parishioners only at the Great Vigil (other times we're still quite inclusive)

If this were Saturday Night Live, there could be a skit of John the Baptist dealing with such Baptismal parties as described above. I'd pay to see that.

Whenever I hear DIES IRAE, that GODFATHER baptismal scene immediately flashes into my memory. Michael's facial expression began to change at that very moment. I use it as the illustration of pure unadulterated evil for anybody hard of understanding the form evil can take. Once, we had a child whose sibling was being baptized and we had to watch his hands as he tried to start swishing them through the water in the font that was low enough for him to reach..I figured he wanted to baptize himself. Maybe he'll become a priest one day, if not a Michael Corleone.

Do you renounce the urge to slip out at the peace, thereby missing the entire rest of the service, and all other temptations that draw you from receiving the Holy Sacrament on your child's/godchild's Baptism day?