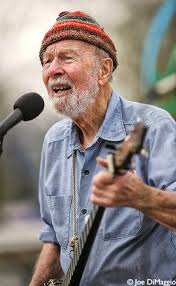 If you haven't noticed (because you don't have an internet connection), social media is abuzz about the death of singer-songwriter Pete Seeger. In fact, if one more person posts a picture of him, Facebook may actually explode.

So rather than doing likewise, I thought I'd offer tips for incorporating Pete Seeger songs into your Sunday worship service. Yes, folks, this is the Seegcharist (the term coined by my archnemesis Scott Gunn).

OPENING HYMN: The Bells of Rhymney (This is an obvious choice as bells are often used to announce the start of worship. Also it has this great line: "Even God is uneasy, say the moist bells of Swansea."

COLLECT OF THE DAY

Celebrant: The Lord be with you.
People: And also with you.
Celebrant: Let us Pray.
I’ll arise at early morning,  When my Lord gives me the warning,  That the solar age is dawning,  And it’s good enough for me. Amen. (last verse of Old Time Religion)

Lector: A Reading from Pete Seeger: In His Own Words.
People: Thanks be to Pete.

Turn, Turn, Turn (Technically it's a song but it's basically a reading from the Book of Ecclesiastes)

SERMON: Arlo Guthrie (as posted on his Facebook page)


I usually do a little meditation and prayer every night before I go to sleep - Just part of the routine. Last night, I decided to go visit Pete Seeger for a while, just to spend a little time together, it was around 9 PM. So I was sitting in my home in Florida, having a lovely chat with Pete, who was in a hospital in New York City. That's the great thing about thoughts and prayers- Y...ou can go or be anywhere. 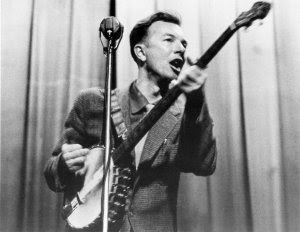 I simply wanted him to know that I loved him dearly, like a father in some ways, a mentor in others and just as a dear friend a lot of the time. I'd grown up that way - loving the Seegers - Pete & Toshi and all their family.

I let him know I was having trouble writing his obituary (as I'd been asked) but it seemed just so silly and I couldn't think of anything that didn't sound trite or plain stupid. "They'll say something appropriate in the news," we agreed. We laughed, we talked, and I took my leave about 9:30 last night.

"Arlo" he said, sounding just like the man I've known all of my life, "I guess I'll see ya later." I've always loved the rising and falling inflections in his voice. "Pete," I said. "I guess we will."

I turned off the light and closed my eyes and fell asleep until very early this morning, about 3 AM when the texts and phone calls started coming in from friends telling me Pete had passed away.

"Well, of course he passed away!" I'm telling everyone this morning. "But that doesn't mean he's gone."


THE PRAYERS: Free form petitions (naturally) with this line from If I Had a Hammer interspersed: "It's the hammer of Justice,
It's the bell of Freedom,  It's the song about Love between my brothers and my sisters,  All over this land."

OFFERTORY HYMN: Michael Row the Boat Ashore (along with the collection plates -- Hallelujah!)

EUCHARISTIC PRAYER C (duh) -- including "At your command all things came to be: the vast expanse of  interstellar space, galaxies, suns, the planets in their courses, and this fragile earth, our island home."

CLOSING HYMN: We Shall Overcome

WARNING: Don't even think about actually using this on Sunday morning!
Posted by Tim Schenck at 10:00 AM

Actually, this sounds like a mass I would love! I wish, I wish.....

At Grace Episcopal Church, Medford, we actually are doing a mostly Pete Seeger service on Sunday. With a Woody Guthrie song and one from the hymnal thrown in...

Rest in peace, Mr. Seeger; or maybe "Keep on singin'!"

I absolutely agree with Jill. This would be a great tribute. You have a great imagination, which is a very powerful gift.