In my December In Good Faith column I write about the joy of Advent calendars. Well, most of them.

I love Advent calendars. Children in households throughout the world (the tradition started in 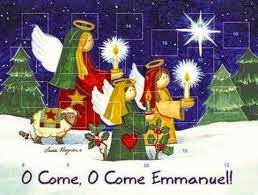 Germany) race downstairs starting December 1st to open that day’s window. There’s a palpable excitement as the countdown to Christmas begins. Granted, when our kids were young I remember thinking, "What could possibly say ‘holy expectation’ more than two siblings fighting over who gets to open the little window on the Advent calendar each morning?" That was before we got smart and bought

Sure, in some households there’s a parallel ramping up of the parental stress level with each successive open window but in general the heightened anticipation for the coming celebration of Jesus’ birth is a good thing.

Ah, marking the arrival of the divine in human form. Right, that’s the point. Although if you have an eye for what passes as an Advent calendar these days you might wonder. But first, let’s talk a bit about this season of Advent from whence the calendar derives its name.

The word itself is an Anglicized version of the Latin adventus which means “coming.” The season begins on the fourth Sunday before December 25th and for Christians it is a time of expectation and hope as we await the coming of the Christ child to a manger in Bethlehem as well as Christ’s second coming in the age to come.

The traditional Advent calendar has either religious or seasonal imagery. One year when our youngest son was about five, our Advent calendar somehow morphed into my wife’s to-do list. I’m not quite sure how this happened, but every time he opened a window, he announced we were obligated to do whatever appeared. So on December 5, we had to hang our stockings. Three days later, we had to buy our tree which, thanks be to God, coincided with the parish Christmas tree sale. One morning, after opening the appropriate window, he declared that we must “have mint.” Whatever that meant.

Anyway, contrary to popular perception, the purpose of an Advent calendar is not to mark down the number of shopping days until Christmas. But after doing some exhaustive research (ie. Googling the topic) I’ve discovered a variety of calendars that have left the whole point -- anticipating the birth of Jesus -- in the Yuletide dust. 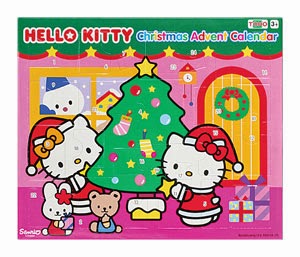 The Advent calendar explosion covers several broad categories: beauty, alcohol, toys, and candy. None of which are bad things in and of themselves but opening 24 bottles of whisky over 24 days seems an odd way to welcome our Savior’s birth. Ditto the Barbie, Kit Kat, and Lego Star Wars Advent calendars. And don’t even get me started on the (no I’m not making this up) Lingerie Advent Calendar.

Now lest you think this is just another rant against the so-called War on Christmas, let me assure you I have no camel in that fight. My basic take is, if you get all fired about people wishing you “Happy Holidays” why not redirect that energy to 1) go to church and 2) feed the poor. Oh, and the word “holiday” derives from the phrase “Holy Day” so relax.

Blessings to all during this special season and if you discover a Fruit Cake Advent calendar, please keep it to yourself.