Deadlines have no respect for vacations. Thus, my monthly In Good Faith column was filed from the road. 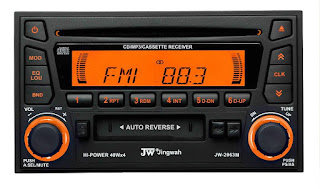 It occurred to me on the ubiquitous summer vacation drive down I-95 to visit family that there is literally not a single song the whole family can agree on. Forget about genres — that’s a lost cause. But our family of four can’t even agree on one song we all like.

That’s not to say there aren’t any songs we all know. Between us we can remember all the words to the National Anthem and we’re pretty familiar with Happy Birthday.  But finding a single song at least one of us doesn’t despise is apparently impossible.

This isn’t unusual between generations, of course. Just do a little research on the history of rock ’n roll (Ed Sullivan Show, anyone?) or watch the 1980’s classic movie Footloose starring Kevin Bacon. Every succeeding generation is convinced their music is by far superior to whatever was written before they arrived on the scene.

Here’s how it breaks down in the car: Wife — Madonna, all things ’80’s, and Top 40 (basically anything played by radio stations with “Z” or “Kiss” as the prefix, as in Z100 or Kiss 108). She’s also a big seat dancer which has the bonus effect of mortifying the boys. Eldest teenager — rap, hip hop, lots of artists with the word “Ice” in their name like Ice-T or Ice Cube (fortunately he doesn’t like Vanilla Ice). Youngest teenager — heavy metal, grunge (with a particular emphasis on Nirvana), and death metal. I’m not sure what death metal actually is but I’m sure it would be appropriate to play at church on, say, Good Friday. Then there’s me: blues, classic rock, and Gregorian chant (not necessarily in that order).

The upshot is that on long car rides I give thanks that God created headphones. Sure, I miss the conversation, but it beats the loud complaining about everyone else’s musical preferences. Until Madonna raps a heavy metal song inspired by the blues, it’s probably better this way.

The irony is that my late father was a symphony orchestra conductor. And while he was very tolerant of my teenage preference for Kiss and AC/DC, it’s not as if my family is fighting over whether to play Bach or Mahler. Arguing between Metallica, Taylor Swift, Public Enemy, and the Rolling Stones feels somehow less highbrow.

The good news in all of this is that it leads to conversation about how musical tastes are as individual as one’s personality. There’s no right or wrong when it comes to what inspires us or moves us or makes us think. To me, rap sounds like a car crash, I can’t understand the lyrics in heavy metal, and as for Top 40 I prefer my music to be played by actual instruments rather than computers. This doesn't make me right or wrong but it does contribute to who I am as a person.

So I think there’s a lesson in tolerance embedded in these long car rides. And in reality it’s not all about the headphones for us. Sometimes we go around the car and let each person pick one song. The rule is that no complaining is allowed during the song and then afterwards the person who picked it must describe what they like about it.


Diversity comes in many forms. Some forms are just louder than others.