Top ways to embarrass your teen on a college tour 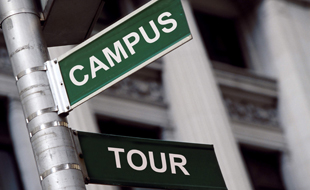 With a junior in high school (what?!) I've had the pleasure of taking him on a couple of college tours. It's true that after awhile they all start to look the same, so can you blame me that my mind begins to wander after seeing yet another "amazing fitness center" that trumps any gym I've ever belonged to?

One of the best parts of these tours, led by the ubiquitously perky coed, is the awkward silence when she asks if there are any questions after her five-minute monologue about the intricacies of the overly complicated meal plan. Actually there's a lot of awkwardness mostly from the teenagers using their strongest powers of mental telepathy to will their parents into not uttering a single word.

Nonetheless, here are some tips for simultaneously breaking the silence and embarrassing your teenager. I mean, there have to be some perks to forking over $150,000 for four years, right?

1. Dress for Success. Black knee-high socks with shorts? Why not? Maybe you'll even start a new retro fashion trend. Or maybe dig your 1980's-era multicolored spandex running tights out of the recesses of your closet. You can show off the contours of your middle-aged legs while considering the walking tour your workout for the day. Don't forget to announce your Fitbit steps at every stop on the tour!

2. Dining In. Make sure to ask the tour guide if parents are eligible to sign up for the meal plan. Since you plan to eat with your son/daughter and friends in the dining hall at least twice a week. Clarify whether the plan truly is "all you can eat" since you will have driven five hours for dinner.

3. What's in a Name? Definitely question the name of the school mascot. "What do you mean they're called the North American Spotted Yet Fighting Owls? Don't you know that's an endangered species!?" Then stage a sit-in on the quad until the name is changed. 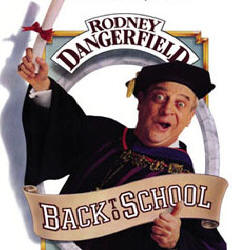 4. Matchmaker. Start telling the other prospective students on the tour that your son/daughter was just dumped by his/her girlfriend/boyfriend and is "quite the catch." Then list the reasons for your progeny's awesomeness starting with their kindergarten prowess in finger painting.

5. Back to School. Loudly talk about how you're also considering enrolling so you can reenact Back to School by throwing massive parties and having an affair with one of your professors.
Rodney Dangerfield's role in the 1986 movie

6. Memory Lane. When passing Fraternity Row, make sure to share, in vivid detail, all your best drunken carousing stories with the entire group. When the tour guide explains that Greek life has evolved over the years and that the collective GPA of those in fraternities and sororities is actually higher than the school average, guffaw loudly. And state your unequivocal belief that hazing builds character. Just look at you!

These are just a few tips to help make your college tours more enjoyable.

But in all seriousness, I literally don't care where Ben ends up going to school. I just want him to be happy, make a few life-long friends, find his passion, and continue to live more fully into the person God is calling him to be. And perhaps send me a t-shirt from the bookstore.

Hold out for a sweatshirt!

dear,
website author
As you and your children research, investigate and visit colleges that may be of interest, you will find that each college has a different look, feel and appeal. To help ensure that you and your children make clearly focused decisions, you can use the information that follows to rank your choices.
see more details: college