In Good Faith: Searching for Clues

In my latest In Good Faith column, I explain why I am taking my place as the latest in a long line of crime-fighting clerics. 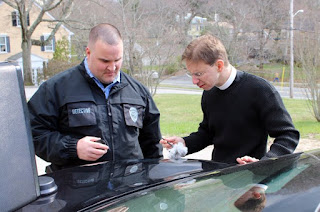 It all started with an innocuous, tongue-in-cheek text from a friend: “I think you should help the local police solve mysteries like the vicar in Grantchester.”

At first I thought  this was a joke but then I thought, why shouldn’t I help out the Hingham Police Department with their unsolved mysteries? Sure, my wife has accused me of being rather unobservant (how am I supposed to know what color the dining room walls are unless I’m, you know, actually in the dining room?). But I’ve binge-watched enough Law & Order to know the Miranda Rights by heart. And I’ve watched David Caruso in CSI:Miami so I’ve learned the precise moment at which to remove my sunglasses to achieve maximum dramatic effect when interrogating a suspect.

But besides all this, there’s certainly precedent for clergy aiding the cops. Besides the Rev. Sidney Chambers, the priest in Grantchester,, there’s G.K. Chesterton’s Father Brown, the Father Dowling mysteries, Andrew Greeley’s Father Blackie Ryan, and a parishioner recently lent me a mystery series by Julia Spencer-Fleming featuring a crime-fighting Episcopal priest named Clare Ferguson.

I’m not sure how all these clerics find time amid their busy days to look for clues — perhaps that’s the real mystery here. Nonetheless, I’m sure I can moonlight a bit while still faithfully tending to the flock. I mean, if the detectives on Law & Order can get from Battery Park to Harlem in 30 seconds during rush hour, anything’s possible, right?

Anyway, I tweeted out my friend’s suggestion and suddenly it became a thing — thanks to Patriot Ledger writer (and Twitter follower) Lane Lambert. He loved the idea of life imitating art and suddenly an article about this new “partnership” was on the front page. Slow news day aside, Sergeant Steven Dearth of the Hingham Police Department replied that they’re always open to help. Perfect! I was in.

Actually, I did meet with Sergeant Dearth — we had a lot of fun with this, trading photos on Twitter. Who knew the Hingham Police had a Twitter account? But more importantly, it’s helpful to remember that the police are set within the community rather than set apart from it.

There has been a lot of negative publicity regarding law enforcement of late — much of it deserved, especially in relating to people of color. But we can’t forget that there is also a tremendous amount of good work being done out there in difficult conditions.

Calling for justice and praising those who serve their communities faithfully are not mutually exclusive. As a person of faith, I pray for both an end to senseless violence and for greater communication and understanding. Something that begins with seeing one another as fellow children of God and recognizing that we’re all in this together.

In the meantime, if you see me walking up and down Main Street with a huge magnifying glass “looking for clues,” please do everyone a favor. Call the police.

Nicely developed. You are such a reasonable and respectful person. You make it look easy, but we see when we look around us that it is not.

Looks like you have SPAM comments on this post. See if you can discover which ones they are! As ever, a totally fabulously ridiculous posts in the very best sense of the word, "ridiculous."

when searching for a new wife, just ask her 7 simple questions that are here https://kovla.com/blog/7-basic-questions-you-should-ask-yourself-before-searching-for-a-russian-wife/ and you will be happy!