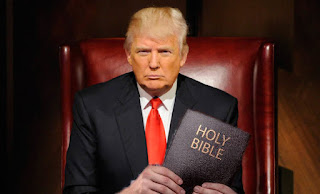 In 1820, Thomas Jefferson created his own version of the Bible. Sure this sounds presumptuous but it was actually published as The Life and Morals of Jesus of Nazareth and is known today as the Jefferson Bible.

Jefferson spent his twilight years literally cutting out passages he either didn't agree with or felt were "supernatural." The Resurrection? Didn't make the cut. Passages referring to Jesus as divine? Into the ash can. Anything smacking of the Trinity? Nope.

While Jefferson took this to the extreme, it was consistent with his overall religious outlook. He was a Deist; Deism being generally defined as belief in the existence of God based on reason and nature alone.

As I've read about Donald Trump's dance with Christianity and listened to words that feel counter to the Christianity I've experienced, I'm convinced he should go and do likewise. Trump should just adapt the Bible to his own purposes. With the Jefferson Bible, there's precedent! Plus any charges of plagiarism can easily be blamed on a speechwriter.

So, while I've already written a Trump-inspired Eucharistic prayer or Trumpcharist, the Trump Bible seems the logical next step.

With a little tweaking, some of the best known passages of Scripture can simply be repurposed to better support the Republican nominee for president. And anyway, what's a bit of a Messiah-Complex among friends?

"The only thing the meek will inherit is being pathetic."

"My grace is sufficient for you, for my power is made perfect in my awesomeness.”

"Trump is impatient; Trump is unkind; Trump is envious and boastful and arrogant and5 rude. Trump insists on his own way; he is irritable and resentful. And now these three abide: faith, hope, and love. And the greatest of these is...Trump."

"Seek first the election of Trump and all these walls will be built around you."

"Therefore put on the full armor of Trump, so that you may be able to withstand the Democrats on that evil day, and having done everything, to stand firm. 14Stand therefore, and fasten the belt of truthiness around your waist, and put on the breastplate of self-righteousness. W1516ith all of these,* take the shield of defensiveness, with which you will be able to quench all the flaming arrows of the evil Hillary."

"This is the day Trump was nominated. Let us rejoice and be glad in it. Unless you're from Mexico or a Muslim-American."

"No one can serve two masters. Either he will hate the one and love the other, or he will be devoted to the one and despise the other. You cannot serve both God and Trump."

"For God so loved the world that he gave his only Donald, so that everyone who votes for him may not perish but may have eternal greatness."

"O taste and see that Trump Wine is the greatest."

Of course I could go on and on. But I have a GOP Convention to live-tweet (@FatherTim). But fear not! Others have gone where I haven't had the time to go. There's even a website called donaldtrumpbiblestories.com not to mention an entire #TrumpBible hashtag on Twitter.
Posted by Tim Schenck at 8:35 PM